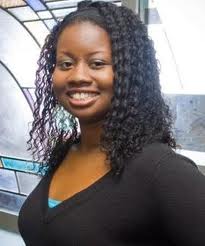 “Bittersweet.” That’s how Kyla McMullen describes what it feels like to be the first African-American woman at the University of Michigan to graduate with a

“I don’t think there’s anything special about me,” says McMullen, with a modest laugh. She explains that while it is gratifying to be recognized as a “first,” her accomplishment points out a sad reality: not enough women and minorities are pursuing advanced degrees in computer science. Out of the more than 1,400 Americans who received Ph.D.s in computer science from 2010 to 2011, less than a quarter were female, and a mere 1.2 percent – 16 people – were African-American, according to the latest Computing Research Association Taulbee Survey. It’s a good thing staggering statistics like that did not deter McMullen.

McMullen’s passion for computer science started early and was nurtured throughout high school. “When I was little, I always liked gadgets,” she says. She remembers being fascinated by her family’s first computer because it seemed like magic. She admits to staying up all night, clicking through file folders, trying to figure out how it worked. Luckily for her, the high school in her hometown of Oxen Hill, Md., had a special computer science track. This meant exposure to a curriculum that most high schools lack, and the opportunity to take courses in computer programming and engineering early on.

It paid off. One day, she was sitting in calculus class when a guidance counselor called her to his office. She thought she was in trouble, but he wanted to recommend that she apply for UMBC’s Meyerhoff Scholarship Program.

“It was an excellent opportunity,” says McMullen of the program. Though tough, she credits the program’s sense of community and her mentors as crucial ingredients to her success. She remembers her time at UMBC fondly; especially the hours spent burning the midnight oil with her two study buddies, Aimee Strang and Nwokedi Ibika,who is now, coincidentally, the first African-American to get a Ph.D. in computer science from Perdue University…