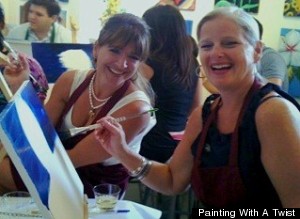 One of the reasons I started my website was so that women could have a place to come together and dream. We women need to know that we don’t have to hang on to an old dream that has stopped nurturing us — that there is always time to start a new dream. This week’s story is about two women who found a way to make anyone an artist, while giving back to their community after the devastation of Hurricane Katrina. -– Marlo, MarloThomas.com

By Lori Weiss
Just over the big bridge from New Orleans, lies a city that will take you a step back in time. Some refer to Mandeville, Louisiana as a kind of Mayberry, where neighbors help neighbors and it’s not unheard of for the city attorney to take his payment in blueberry pies. The small resort town has a few stop lights, a Walmart and today, what some might call an empire — an empire that was built by Cathy Deano and Renee Maloney, two stay-at-home moms, who wanted to add a little color to their lives.

“We lived just blocks from each other,” Renee explained, “and we’d walk around the lakefront every morning and talk about things we could do. We were room mothers together, we raised funds for our community after Hurricane Katrina together, and Cathy had gotten me involved with the local arts association — but we were beginning to ask, What about us?”

“My husband is nine years older than me,” Cathy added, “and while I didn’t want to tell him I was worried that something could happen to him, I felt like if something did, I’d be falling down on my job if I couldn’t educate my son.”

“I got married at 20,” Renee continued, “and started having babies by the time I was 24. All I ever wanted was to be a great mom. But my own mother said to me one day, ‘They’re going to grow up and then what?’ And it really made me think.”

So as the two friends walked, they talked about their options. Renee thought it might be fun to create a science fair in a box, something she’d had a lot of experience with, while raising three kids. And Cathy, who has a degree in interior design, thought maybe they could start an architectural salvage company. But what they really wanted was something where they could be equals — and they found it, in Cathy’s backyard barn, with a little bit of paint and a whole lot of wine.

“Cathy was convinced that anyone could be an artist,” Renee said, “that it was just like cooking and that we could offer group painting classes. She said, ‘If I stood by you and told you what to put into the pot and you did everything I told you, you’d be a cook.’ I wasn’t so sure. I failed 6th grade art.”

“So I asked her, ‘what would make you try it?’” Cathy recalled with a smile.

“So we put together a class in my backyard barn,” Cathy explained. “We went to the local art store and bought brushes and easels. And on the way back, we picked up five bottles of wine. We invited our family and close friends, knowing they’d at least come for the wine, and if it flopped they wouldn’t tell anyone. And we brought in my sister’s step-daughter, who was an artist and teacher.”

“I figured if mine came out really bad, I could blame it on the wine,” Renee added with a shrug. “But she took us all through every step. Put a dot there. Now put a dot four inches down. Then she had us connect the dots. And in two hours, 15 of us had each painted a Matisse. And I didn’t have one flashback to 6th grade!”

So in the middle of a recession, in a community that was still cleaning up from the devastation of Hurricane Katrina, the two women who had devoted endless hours to their local art association, decided to begin with a blank canvas. They set out to create a business that would give their neighbors a welcome break from the problems that surrounded them.

On a shoestring budget, the pair found a small place near their homes — and got on their hands and knees — scrubbing and painting until the place looked presentable. Glass tables Cathy brought from home doubled as desks and the two women shared a used $200 laptop computer. Weeks later, easels were in places, an art instructor who could turn just about anyone into a budding Picasso was on site and a “bring your own bottle” policy was in place. They named their studio “Corks N Canvas” and opened the doors to their very first students.

“People thought we were crazy to do this,” Cathy said, “they kept telling us that people didn’t have disposable income during a recession, that they were still worried about fixing their homes. But what we knew was that alcohol, movies and make-up don’t suffer during bad times, because they make you feel better about yourself. People were looking for an escape. And we sold out immediately.

“It was all word of mouth. Our customers started posting their paintings on Facebook! They’d walk into their offices and say, ‘I had the best time last night.’ You wouldn’t typically say to someone, Let me tell you about the painting I did, but you will tell them about somewhere you went and had a great time. People were driving across the river from New Orleans.”

“One night we had a power outage,” Renee added, “and we offered everyone their money back. They insisted on staying and they all went out and turned their car lights on, so they’d shine into the building. And they just kept on painting. I remember one woman said, ‘This is better than yoga because you can drink wine!'”

In the first six months, the pair turned a profit and put every dime back they’d borrowed from their savings. It wasn’t long before they opened three more Louisiana stores and then something interesting happened. Their customers, many of whom had come back to visit after being evacuated during Hurricane Katrina, began asking about opening their own art studios –- in their new hometowns.

They literally had potential franchisees knocking at their door, before they’d even decided to sell the concept. So with a little help, they packaged their business, named it “Painting With A Twist” (the twist being the wine, of course) and started interviewing potential candidates.

“One couple had evacuated to Houston,” Cathy said. “The wife’s company moved there and they followed, but the husband was a photographer and had lost all of his equipment in the storm. They felt like refugees. When you’re born and raised in New Orleans, you feel like there’s nowhere else. But once they set up their studio, they immediately became immersed in the community. He said he didn’t feel like he’d ever be home again, but now Houston has become their home.”

Today, just five years since the women got started, there are 67 franchises and the company has brought in more than $20 million in revenue. But the ladies haven’t forgotten where they came from. The former stay-at–home moms, who spent their spare time volunteering in the community, have made giving back a core value of the company. Every month, each of the franchises holds a fundraiser called “Painting With A Purpose,” which gives back to the community. And at the end of every class, when students walk out with their renditions of a Renoir or Van Gogh, the instructors donate theirs to a family that’s moving into a new Habitat For Humanity home.

“We didn’t have any grandiose plans when we started this,” Renee explained. “It was just a fun thing to do. We didn’t even think of it as an official business. But we’re learning something new every day.

“I have a plaque in my office that says ‘I may not have gone where I intended to go, but I think I have ended up where I intended to be.’ That’s exactly how we feel,” she said as she reached for Cathy’s arm. “And neither of us can imagine being here with anyone else.”

To find a class near you, you can visit PaintingWithATwist.com.