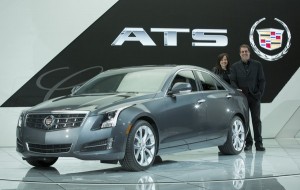 A panel of 49 automotive journalists considered the new cars, SUVs and trucks over the past year and narrowed the field down to six finalists. The Ford Fusion and the Honda Accord were the other finalists for the car award.

The Ford C-Max and Mazda CX-5 were the runners-up in the SUV and truck category.

“This is a very meaningful honor for the entire Cadillac team, especially the men and women who build the ATS in Lansing, Mich., and our dedicated and talented designers and engineers,” said Bob Ferguson, GM vice president, global Cadillac.

Cadillac introduced the ATS at the 2012 auto show in Detroit, positioning the sports sedan as a competitor to BMW’s famous 3-series lineup. It reached dealers in the last  months of 2012, garnering about 7,000 sales. Cadillac is expected to grow the size of its CTS sedan when it is next redesigned, to give the brand a lineup that better matches with offerings from BMW and Mercedes-Benz.

Chrysler executives said they were pleased with the win for the Ram truck. Although the automaker does a big truck business, it is a perennial third between Ford’s F-series trucks and the Chevrolet Silverado.