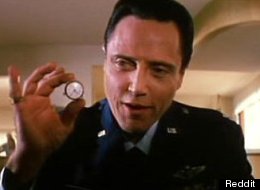 As it turns out, “Django Unchained” references a character named “Crazy Craig Coons” (his name is spotted on a wanted poster); Coons is also the last name of Christopher Walken’s character in “Pulp Fiction,” the captain who visits young Butch to return his father‘s war watch.

Don’t feel bad if you didn’t catch the hat tip; not even Tarantino could remember which character from “Pulp Fiction” had origins in “Django Unchained.”

“You know, I got to think about that. I actually — I’ve spaced,” Tarantino told Jake Hamilton (who you remember from that awkward Samuel L. Jackson video interview). “I know what you’re talking about. There actually is one character in the film, but I can’t think of it right now. […] It’s so minor, it’s so minor.”

Watch Tarantino discuss this with Hamilton in the video below (starting at 3:28).