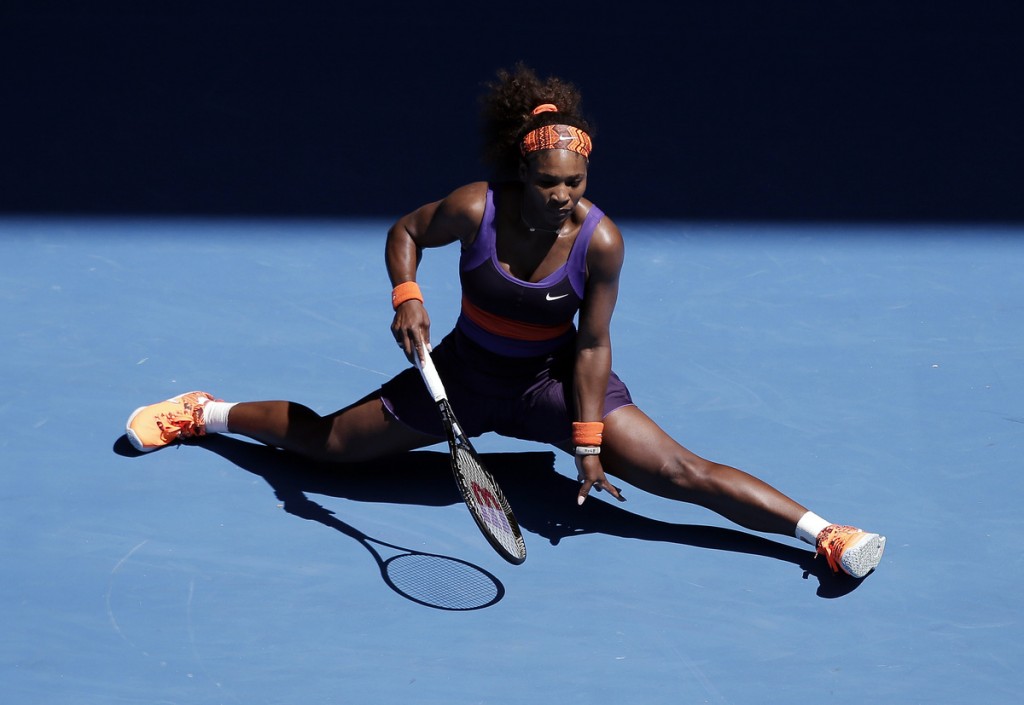 MELBOURNE, Australia — Serena Williams’ dominating run at the majors is over. American teenager Sloane Stephens is headed to the semifinals of the Australian Open.

Williams hurt her back in the eighth game of the second set, hampering her serve. She had treatment and recovered well enough to give herself a shot at winning the match, but the 19-year-old Stephens kept her composure in a 3-6, 7-5, 6-4 victory on Wednesday.

It was the first loss since Aug. 17 for the 15-time Grand Slam winner, ending a run of 20 consecutive wins. She hadn’t lost a match at a Grand Slam tournament since the French Open, where her first-round exit sparked a resurgence in the second half of 2012 that included titles at Wimbledon, the London Olympics, the U.S. Open and the WTA Championship.

Williams walked around the net to congratulate Stephens, who then clapped her hand on her racket and waved to the crowd, a look of disbelief on her face.

She then went to her tennis bag, pulled out her phone and started checking for any text messages from her mother.

“I was hoping she had texted me right away. I thought maybe she was texting me during the match,” Stephens said. “I’m sure my grandparents are like freaking out.”

Stephens has said she had a photo of Williams up in her room when she was a child, and had long admired the Williams sisters.

“This is so crazy. Oh my goodness,” Stephens said, wiping away tears in her post-match TV interview. “I think I’ll put a poster of myself (up) now.”

For her part, Williams said the bad back was just another problem to contend with at a Grand Slam event that had been “absolutely” her worst for injuries.

“Everyone at this stage in the locker room has something wrong with them. It’s no excuse,” she said. “I went for this drop shot and it just locked up on me. I couldn’t really rotate after that.

Williams was up a set and a break before Stephens settled in. In the eighth game of the second set, Williams was chasing a drop shot to the net when she appeared to jar her back. She needed a medical timeout after the set, and then slowly started to regain the speed in her serve.

But she was clearly frustrated at times, smashing her racket into the court in the third set and then flinging it toward the chairs on the side of the court. She looked to the sky occasionally and yelled at herself.

Azarenka, with her most famous fan sitting in the crowd wearing a shirt reminding her to keep calm, overcame some early jitters to beat Svetlana Kuznetsova 7-5, 6-1 in the earlier quarterfinal match at Rod Laver Arena.

After dropping serve in a long fourth game that went to deuce 10 times, Azarenka recovered to dominate the rest of the match against Kuznetsova, a two-time major winner who was floating dangerously in the draw with a No. 75 ranking as she recovers from a knee injury.

Wearing a red sleeveless T-shirt that read “Keep Calm and Bring Out the Bottles,” the name of his next single, Redfoo stood, clapped and yelled “Come on, Vika!” during the tight first set.

Asked if it helped to have her No. 1 fan wearing a keep calm logo, Azarenka said “I was looking more at the part that says `Bring out the bottles.'”

Of her game, she added, “I’m just glad I could produce my good tennis when it was needed.”

Williams’ loss was a boost for Azarenka, who lost all five head-to-heads against the American in 2012 and is 1-11 in their career meetings.

In the men’s quarterfinals, 17-time major winner Roger Federer was playing No. 7 Jo-Wilfried Tsonga in a night match and U.S. Open champion Andy Murray was to meet Jeremy Chardy of France.

Novak Djokovic is already through to the semifinals after his 6-1, 4-6, 6-1, 6-4 win over fifth-seeded Tomas Berdych on Tuesday night.

The 2-hour, 31-minute victory took exactly half the time of his five-set, fourth-round win against Stanislas Wawrinka.

“It was a great performance. I was hoping to have a shorter match … just not to go over 5 hours,” Djokovic said, in a comparatively subdued mood after a more routine victory. “It’s always going to be tough against Tomas; he’s an established player. He has a big game, big serve. He can compete against anyone on any surface.”

Djokovic will meet No. 4-seeded David Ferrer in the semifinals.

Ferrer survived a quarterfinal battle with fellow Spaniard Nicolas Almagro. Almagro had three chances to serve for the match, but Ferrer broke back each time and went on to win 4-6, 4-6, 7-5, 7-6 (4), 6-2.

Maria Sharapova had a 6-2, 6-2 quarterfinal win over Ekatrina Makarova on Tuesday, and has conceded only nine games in five matches – a record in Australia.

“To be honest, those are not the stats you want to be known for,” Sharapova said.

She’ll play Li Na, who reached the semifinals for the third time in four years at Melbourne Park after beating Agnieszka Radwanska 7-5, 6-3.