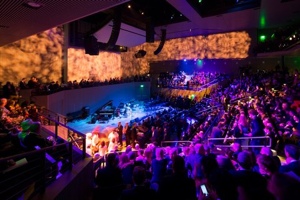 “Congratulations,” Bill Cosby told a roomful of jazz patrons on Wednesday, near the outset of the opening-night concert at the SFJazz Center here. “This is your place, you know.”

The crowd, which filled the 700-seat Robert N. Miner Auditorium, laughed appreciatively at Cosby’s line, which was no less welcome for being obvious.

The SFJazz Center, a $64 million performance space, proudly billed as the first stand-alone building designed for jazz in this country, was being consecrated in the presence of assorted board members, capital donors and series subscribers, who all had a stake in the project. But the concert, which was broadcast on radio by WBGO and WWOZ (and online by NPR Music), was also intended for a larger audience of the jazz faithful, a global audience. If all goes as planned, this is to be their place too.

SFJazz, the Bay Area nonprofit organization devoted to presenting this art form, is celebrating its 30th season this year, and Randall Kline, its founder and executive artistic director, wanted the evening’s festivities to showcase long-standing bonds. So the concert featured musicians who have a history with the organization, including  tenor saxophonists Joshua Redman and Joe Lovano and pianists McCoy Tyner and Chick Corea. Each of this season’s five resident artistic directors — guitarist Bill Frisell, pianist Jason Moran, violinist Regina Carter,  percussionist John Santos and  alto saxophonist Miguel Zenón — had some integral part to play.

Several of the evening’s highlights were touched by serendipity.  Corea and Frisell, who had never played together before, fashioned an exquisite duo improvisation on the standard “It Could Happen to You.” The bassist Esperanza Spalding played for the first time with Corea and drummer Jeff Ballard. Tyner led a heavyweight quartet — with Lovano,  Spalding and drummer Eric Harland — in a version of his 1970s staple “Walk Spirit, Talk Spirit.” And Moran teamed up with Harland for a spikily abstracted take on Fats Waller’s “Yacht Club Swing.”