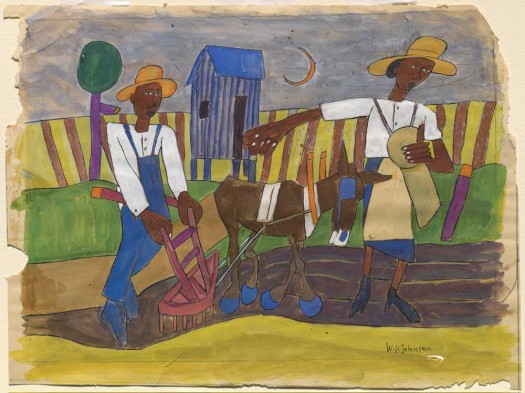 Tragic lives in the art world are so common as to be unfortunately dismissible. Poverty. Infamy. Obscurity. Traits of certain artists have become the stuff of cocktail jokes.

There is humor to be had, sure, but there also is reality and the weight of its stupid truths bearing down on a person. In short amounts of time, artists like William H. Johnson, a Harlem Renaissance-era painter from the deep South, were able to glean and pass on true beauty found by peeking around the mass that would soon crush them.

The entire arc of Johnson’s painting career is on display in “William H. Johnson: An American Modern,” a new exhibition at the Georgia Museum of Art that opened last Saturday and runs until May 12. The show begins with a look at his heavily influenced years in Europe and ends with the jazz and folk lens through which he finally attained his lifelong artistic goal, all before mental illness captured him at 46 and relegated him to life in a hospital.

Only recently has Johnson’s art risen to national prominence, buoyed especially by President Obama’s selection of four Johnson paintings to hang in the White House.

“In all my years of painting, I have had only one absorbing and inspired idea — to give, in simple and stark form, the story of the Negro as he has existed,” Johnson told the New Amsterdam News in 1946, a quote that’s printed on a wall in the exhibiting gallery.

It took Johnson until his 40s to achieve his inspired idea by returning to his native South Carolina and adopting a bountifully colored folk style, but the steps he took to get there are equally notable.

Johnson was born in 1901 to a housekeeper mother in Florence, S.C. His father, supposedly, was a white man with some social status. Growing up, William worked as a field hand alongside his able-bodied stepfather, and cared for his younger brothers and sisters.

Johnson’s artistic talent developed at an early age, but he left school as a teenager to help support his family following an accident that disabled his stepfather.

At age 18, Johnson packed up for New York, where he expected to work, save money and eventually study art.

In New York, he found support from his instructors at National Academy of Design, and soon set off for Europe, where he would meet his Danish wife and fellow artist, Holcha Krake. Work created during Johnson’s European stretch is heavily reminiscent first of the post-Impressionists and then later of Expressionism.

Landscapes, mostly, catch Johnson’s eye in his European work, and are given movement by Johnson’s accentuated lines, much like his contemporary and inspiration, Lithuanian artist Chaim Soutine.

Johnson found some early financial success among Norwegian collectors, and he devoted a number of paintings to the country’s quaint, austere fishing villages and harbors. The colors and shapes are stark and abstract, with boats represented as soft-cornered white and brown blobs; hints of blues, yellows and reds evoking the typical colors of fishing towns; and with grey tones scheming as sky in the background. Only through removed inspection does the shape of a village emerge.

A certain painting from Johnson’s time in Northern Europe — he traveled extensively with Krake to France and north Africa — hints at his future exultations of the common person. “Danish Youth” depicts a young Scandanavian male through which Johnson tried to show the subject’s history as reflected through the lines in the stretched across his skull. The boy’s history, geography and culture are delivered through Johnson’s rendering.

Krake and Johnson eventually would flee Europe over fears of what the rise of Nazism would mean for an African-American artist.

But back in New York, Johnson would again experience racial prejudice and suffer the loss of much of his work by fire. In this time, he would produce a stretch of work influenced by his Harlem environment and the jazz that surrounded him. In his earlier post-impressionist work, exaggerated lines gave still images a sense of movement.

Paintings like the “Jitterbugs” series used sharp lines and angles paired with bright Gauguin-like colors to show modern African-Americans in a modern city dancing to a modern music.

Following Krake’s death from breast cancer in 1943, Johnson would head south to paint what seem like the precursors to those jumpy jazz images.

Using found materials like window shades and cardboard, Johnson painted in a style that would be confused for folk art if the viewer wasn’t aware of the artist’s background. Paintings like “Sowing” and “Aunt Alice” are flat, colorful and simplified, using out-of-proportion hands to show action. Johnson often referred to the primitive elements in his work, and in the South, those elements shined.

Johnson would head back to Europe to live with his deceased wife’s family, but soon mental illness would take hold, and he would spent the rest of his days before his death in 1970 hospitalized in New York state.

Accompanying the Johnson exhibit are a number of events offering family involvement with the works. The first of such events is Thursday, a Black History Month dinner at 6 p.m. highlighting the work of local artist Harold Rittenberry that includes a guided tour through the Johnson show. Family day on March 23 focuses on Johnson’s portraits and invites attending families to paint portraits in the bright and bold style of the artist. The museum’s chief curator, Paul Manoguerra, leads a free tour of the show at 2 p.m. on March 27.