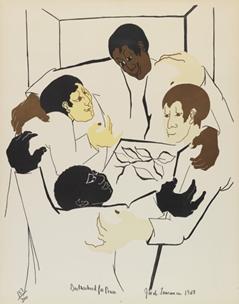 As a woman in the male-dominated engineering field, Carnetta Davis understood well the plight of black artists trying to be recognized with their peers in other races.

“I can draw parallels between my own experiences [and] those experiences of African-American artists, both past and present,” says the onetime Chattanoogan, now a resident of Birmingham, Ala., “and these parallels fuel my passion.”

That passion is the serious collection of art, something she and her husband, Norm Davis, have been involved in for the last seven years. A portion of their collection, “African American Art: Selections from the Carnetta and Norm Davis Collection,” is on display at Hunter Museum of American Art.

It is one of at least three local exhibits primarily featuring black artists during February, which is Black History Month.

The Bessie Smith Cultural Center is offering “We Shall Not be Moved — The 50th Anniversary of Tennessee’s Civil Rights Sit-ins” through April 7. Urban League of Greater Chattanooga vice president and chief operating officer James McKissic is displaying part of his personal collection at the former First Tennessee Bank building on Glass Street. In the building now called the Bank Art Center, the exhibit runs Saturdays and Sundays through March 17.

Ellen Simak, chief curator at the Hunter, says she met the Davises during a Friends of African American Art tour in 2012. The couple’s collection was made available, she says, and museum officials were able to choose what they wanted.

“We chose a group of works that would fit within [the hallway gallery off the] lobby space,” Simak says, “and that tell a cohesive story.”

The 12 works, she says, are “largely figurative” and are, in general, “strong pieces that work well together.” Among the 20th-century artists represented are Jacob Lawrence, Radcliffe Bailey, Kara Walker and Norman Lewis.

The works, according to museum officials, may be traditional subjects but are seen through the lens of black heritage.

So, while David Driskell’s “Reclining Nude” celebrates the work of the French modernist Henri Matisse, it also emphasizes the African roots of Matisse’s inspiration, museum officials say. And while Elizabeth Catlett based the farm worker in her “Survivor” on a mid-1930s photograph by Dorothea Lange, it also reflects her dedication to figures that express the dignity and power of black Americans.

McKissic, an artist himself, will share 16 to 18 pieces from his collection of works by black artists or that have black people as their subject.

“The reason why I collect is for these opportunities,” he says. “I’m excited because I want young people to see the artwork, to have a more intimate experience [with it] in their neighborhood.”

The collection of paintings, drawings and photographs, offered in partnership with the Glass House Collective, opened Saturday.

“Some of the pieces have been loaned to museums,” he says. “They’re high-quality pieces. There’s no reason why [similar art] should just be on the bluff [at the Hunter].”

Carmen Davis, who helped McKissic curate his exhibit and who is the curator of the Bessie Smith Cultural Center, says the center has exhibited civil rights photos and artifacts before but none centered solely on Tennessee.

The new exhibit, she says, includes, among other things, a panel of local photos from protests in the 1960s, a replica of rules that Howard High School students wrote for themselves before they attempted to integrate downtown lunch counters, and a fire department nozzle from the era in which fire hoses were turned on civil rights protesters to dispel them.

“Chattanooga [officials were] the first in Tennessee to use water hoses and dogs to control the situation,” says Davis.

Other items include political buttons, propaganda from both sides on what the desegregation of local facilities would mean and a backstage pass from the August 1963 nationwide march on Washington, D.C.

“There are some really interesting things where you can see the mindset of people on both sides of the coin,” Davis says.

A few items in the exhibit pre-date 1960, 50 years before the touring exhibit was launched, but most are from the 1960s, she says.

The touring display, developed by the Tennessee State Museum, is divided into four areas: Segregation and Resistance, Non-Violence, Sitting-In in Tennessee, and Direct Action and the Civil Rights Movement.