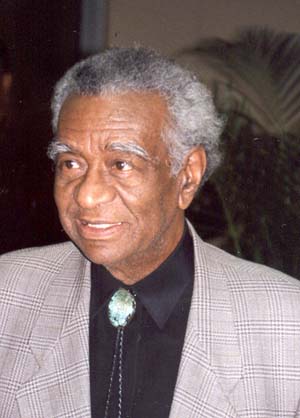 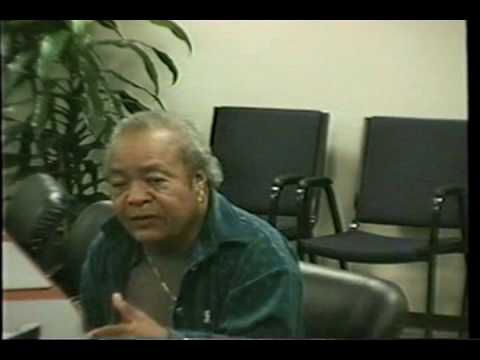 Known for his narrative murals and outstanding draftsmanship, John Biggers dedicated his work to the depiction of the human condition. Born in Gastonia, North Carolina, he studied at Hampton Institute – late named Hampton University – under Victor Lowenfeld and Charles White. In 1943, Biggers’ mural Dying Soldier was featured in the Museum of Modern Art’s landmark exhibition organized by lLowenfeld, Young Negro Art. After serving in the United States Navy, he enrolled in Pennsylvania State University (where Lowenfeld had relocated), earning a BS and MS and PhD. In 1949, Biggers moved to Houston, Texas, where he founded and then chaired the art department at Texas Southern University. In 1950, he was awarded first prize at the annual exhibition of the Museum of Fine Arts in Houston for his painting, The Cradle.

In 1957, he traveld to Africa on a UNESCO grant to study Western African cultural trditions, becoming on e of the first black artists to trav el to Africa. This opportunity, which he described as the “the most significant in my life’s experiences,” led to the publication of Ananse: The Web of Life in Africa (1961), a book of drawings and text based on his journeys in Ghana, Nigeria, and other parts of Africa. Whther drawing African women dancing or creating one of his twenty-seven public murals, Biggers drew inspiration from his ancestral heritage, African art Southern black culture, nature, and everyday experiences.

Often labeled as a Social Realist for his figurative social commentary of the 1940s, Bigger’s work continually evolved over five decades, and in 1995, the Museum of Fine Arts in Houston and Hampton University Art Museum organized his first comprehensive retrospective exposing the depth of his oeuvre. John Biggers died in 2001, leaving behind a body of work that, as Maya Angelou stated, “leads us through his expressions into the discovery of ourselves at our most intimate level.”

Master Artist, Educator, Author, and Mentor, John Biggers (b.1924) has been a major contributor to the evolution of American art and culture as well as the changing consciousness of the African American experience. With a career spanning 50 years, this prolific artist continues to document the human experience with a rich universal visual language.

In 1957, Biggers was one of the first black American artists to visit Africa, sponsored by a UNESCO fellowship. The landmark painting, “Jubilee: Ghana Harvest Festival” was created by Biggers between 1959 and 1963 and has come to represent the artistic breakthrough of this period as well as Biggers’ profound vision and consummate skill.

(Born February 27, 1924, in New Orleans) is an African American artist (primarily a printmaker), author, and former educator. Widely exhibited and collected as an artist herself, she is nevertheless perhaps even better known as a historian, critic, and collector of art, especially African-American art. Lewis has completed four degrees, five films, seven books, and a substantial body of artworks which have received great critical respect. Her artistic and wonderful mind showed itself at the early age of four, when she started drawing and painting. She pursued an art degree starting off at Dillard University in 1941, but left Dillard for Hampton Institute in Virginia, earning her masters degree in 1947. She earned her B.A. degree at Hampton University, then earned her master and doctorate in Fine arts and Art History at the Ohio State University.

In the 1960s 1970’s her work reflected humanity and freedom. She produced lithographs, linocuts, and serigraphs.