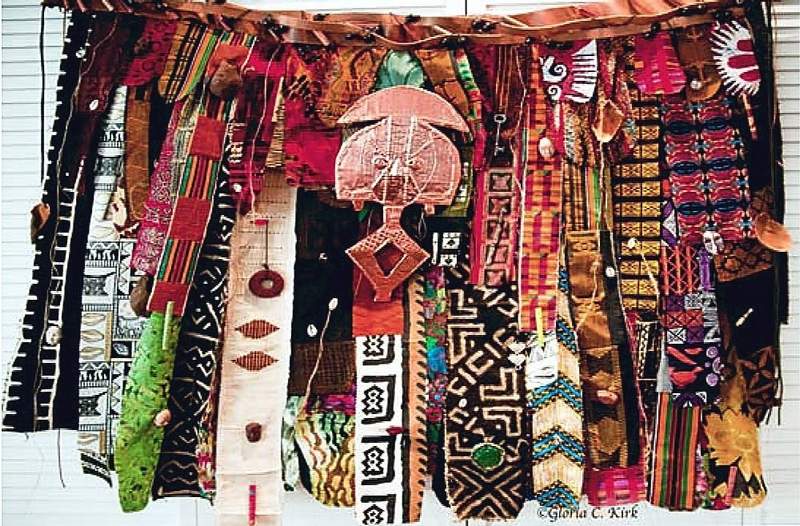 Photo courtesy of Gloria Kirk “Egungun Masquerade Ensemble” is a mixed media piece by Kirk that will be on display at the” Show Me What You’re Working With” exhibit.

Variety of mediums on display for Prince George’s County exhibit

“I am very excited for this exhibit,” said Washington, D.C. resident Gloria Kirk. “It will be a feast for my eyes, a pleasure for my heart and a lesson for my brain.”

Kirk has been a member of The Black Artists of D.C. for the last 12 years. Her artwork, along with the work of 16 of her fellow group members, will be on display starting Monday at the Brentwood Art Exchange. The art is part of an exhibit entitled “Show Me What You’re Working With.”

Show Me What You’re Working With

Though several members of The Black Artists of D.C. have showcased their work at Brentwood before, the exhibit marks the first time they’ll do so collectively.

“The group is really active and a lot of the members have come to a lot of our shows and [we] felt like these are people who are really engaged in the art community in D.C.,” said Phil Davis, acting director of the Brentwood Art Exchange. “[We] wanted to show what [the group] was all about.”

Davis added that the mission of the Brentwood Art Exchange, located at the Gateway Arts Center, is to draw people to Prince George’s County through high-quality exhibitions.

“We hope cultural activity becomes a drive for people wanting to be in the area,” said Davis.

The Black Artists of D.C. was founded in 1999 and its members include artists, educators and collectors among others. The group aims to enliven the arts in the District by encouraging each other to try new mediums, methods and techniques.

“It’s been invaluable in my growth and development as an artist,” Kirk said. “[Members] have ideas and suggestions … It’s always a very positive constructive critique so you don’t get your ego bruised which is important when you’re starting out.”

After a career as a Foreign Services Officer, a job that took her to Asia, Africa and Latin America, Kirk decided to pursue photography after retiring in 1995. Now, thanks to the experience she’s gained in The Black Artists of D.C., Kirk has begun to explore other mediums as well.

“This is total immersion for me,” she said.

Her home in the District now doubles as an art studio with a space for quilt and doll-making upstairs, a photography office on the first floor and a space in the basement where Kirk said she does “the messy stuff.” She also rents space in a photography studio in Takoma Park.

“[My] inspiration comes from the strength of my ancestors,” said Kirk. “It portrays the thread that runs from past to the present to the future.”

Although the “Show Me What You’re Working With” exhibit coincides with Black History Month, Davis said there is no single theme to the showcase.

Brooking, a professional artist nearly his whole life and a member of The Artists of D.C. since 2006, works mostly in computer generated art and Shibori, a Japanese technique similar to tie-dye involving dyeing cloth by folding, stitching, twisting or binding it. The work he’ll have on display at Brentwood, though, is an example of his latest work in mixed-media. The pieces are headshots of his family under a piece of plexiglass with an image of a mask etched on it.

“Masks are a part of almost every culture,” Brooking said. “We as people, everybody wears a mask. I wanted to be able to see the person behind the mask.”

Brooking said he would like to see the exhibit at Brentwood become an annual showcase to give members of The Artists of D.C. an opportunity to earn recognition outside of the organization.

“Since I am primarily an artist,” he said, “I am very much an advocate for the artist.”