A special issue of the International Review of African American Art 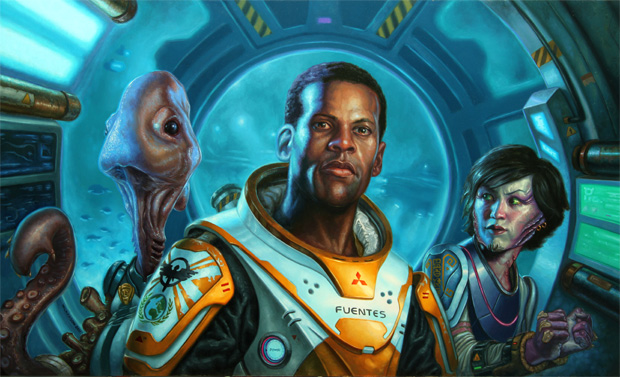 Eric Wilkerson Aquanauts: Distant Origins, 2011. On view in Riffing on the Real: Afro-Futurism in the Arts, Tubman Museum.

Vol. 24, No. 2 – A special issue of the International Review of African American Art on connections between mass media, pop culture, digital technologies and visual art.

“Artists are just as much products of contemporary popular culture, in all its mass technological – media frenzy, as we are — we average, non-artistic folk. As these artists push the boundaries of ‘fine art’ even further out and incorporate or address other media in their work, they increasingly connect with the realities of our every day lives.” – Samantha Ragland, from the “Is It Art” article in the issue.

I am interested in intergalactic space travel and extra-terrestrials, superheroes, psychic vampires, werewolves, time travel, alternate histories, matter transporters and alternate dimensions – real hardcore sci-fi geek stuff. I want to see how African American artists make use of these ideas… And it’s cool now to let your sci-fi freak flag fly. I’m happy to see that. – Jeff Bruce from the “Gallery Universe” article in the issue.

Since it’s coalescence in the early 1960s, there have been two major evolutions in the pop art genre. The second evolution, occurring today, is heavily influenced by hip hop culture; sci fi and other forms of mass media, and digital technologies, and encompasses the work of numerous African American artists working in many mediums.