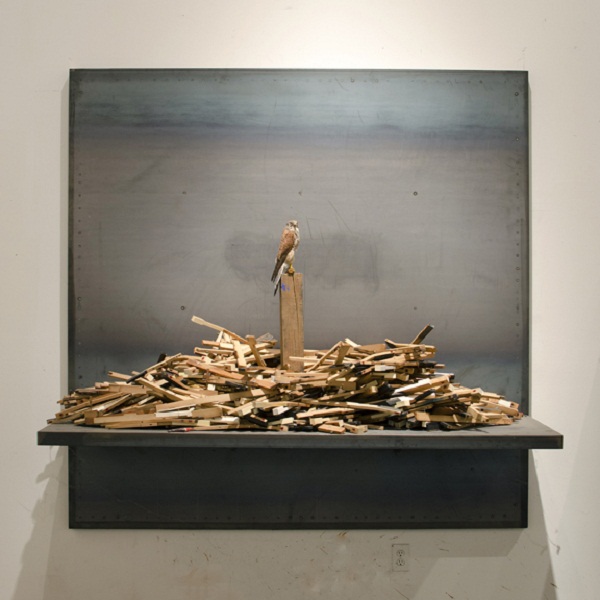 Notes
April 3 – April 27, 2013
Opening reception: Friday, April 5, 2013, 6 – 8:30pm
BRIDGETTE MAYER GALLERY
709 Walnut Street, 1st Floor
Philadelphia, PA
Bridgette Mayer Gallery is pleased to announce its premier solo exhibition of work by artist Radcliffe Bailey. The exhibition, entitled Notes, will feature new sculptures in steel, bronze, porcelain and wood, as well as paintings and works on paper. As installations and spatial complexities are an interest of the artist, Bailey will pay special attention to the architecture of the gallery space for his overall installation.
Radcliffe Bailey’s work layers family histories with historical motifs, using antique family portraits, personal objects and musical references.  In the artist’s words, “My art is about history and the mystery of history. Scientists, preachers, tricksters; they are my muses. I am also very much influenced by musicians, poets, inventers, and practitioners; by people like George Washington Carver and the recently-deceased Charleston blacksmith, Philip Simmons.”  African and African-American themes are common in Bailey’s work. The nautical journey from one land to another- mainly that of African slaves to the new world – can be seen in his series of works on paper that will be on view at the gallery. Carved African figures look out onto colorful expanses of water with musical scores behind them as their night sky. Heavily influenced by music (jazz and hip-hop specifically), Bailey takes cues from the styles in his painting and sculpting practice, piecing together different mediums and imagery to create a harmonious work. Although Bailey’s work pulls from the diverse histories of the United States, art, music, and the world, his work is still meant for the general public. The goal of Bailey’s work is to be “sincere, complex and honest” and to perpetuate conversations about anything from race, to art, to our commonalities as people of this world.
Radcliffe Bailey received his BFA from the Atlanta College of Art in 1991.   He is in the permanent collection of numerous museums including, Metropolitan Museum of Art, New York, Art Institute of Chicago, Chicago, High Museum of Art, Atlanta, GA, Corcoran Gallery of Art, Washington, DC, Smithsonian Institution, Washington,  DC among many others. Bailey has been the recipient of the Gibbes Museum of Art Factor Prize as well as the Johnnie L. Cochran,  Jr. Art Fund,  Inc. Aware for Excellence in the Visual Arts. He has had numerous solo and group exhibitions throughout the United States and abroad including High Museum of Art, Atlanta, GA,  McNay Art Museum, San Antonio, TX,  Jack Shainman  Gallery, New York, NY, Birmingham Museum of Art, Birmingham, AL, New Britain Museum of American Art, New Britain, CT, Tate Liverpool, UK.
Exhibit Link
Posted 4 days ago by Black Artist News