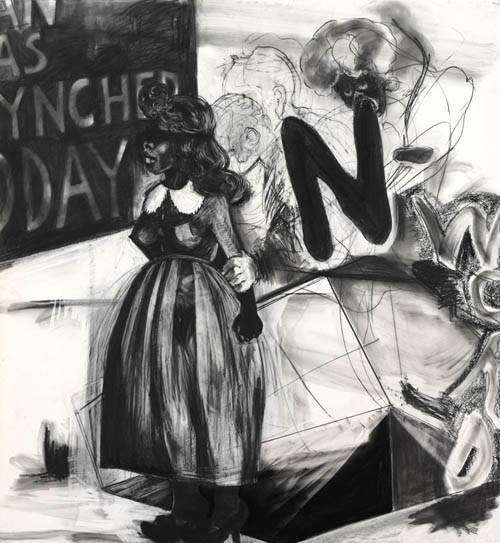 Kara Walker (born November 26, 1969) is a contemporary African American artist who explores race, gender, sexuality, violence and identity in her work. She is best known for her room-size tableaux of black cut-paper silhouettes.

Walker was born in Stockton, California in 1969.[1] Her retired father is a formally educated artist, a professor, and an administrator.[1] Her mother worked as an administrative assistant.[2]

“One of my earliest memories involves sitting on my dad’s lap in his studio in the garage of our house and watching him draw. I remember thinking: ‘I want to do that, too,’ and I pretty much decided then and there at age 2½ or 3 that I was an artist just like Dad.” —Kara Walker[3]

Kara Walker moved to the south at the age of 13 when her father accepted a position at Georgia State University. She received her BFA from the Atlanta College of Art in 1991 and her MFA from the Rhode Island School of Design in 1994.[4] Walker first came to art world attention in 1994 with her mural “Gone, An Historical Romance of a Civil War as It Occurred Between the Dusky Thighs of One Young Negress and Her Heart.” This unusual cut-paper silhouette mural, presenting an old-timey south filled with sex and slavery was an instant hit.[5] At the age of 27 she became the youngest recipient of the coveted John D. and Catherine T. MacArthur Foundation’s “genius” grant. In 2007 Walker Art Center exhibition Kara Walker: My Complement, My Oppressor, My Enemy, My Love was the artist’s first full-scale U.S. museum survey. Walker currently lives in New York, where she is a professor of visual arts in the MFA program at Columbia University.[4] Influences include Andy Warhol, with his omnivorous eye and moral distance; and Robert Colescott, who inserted cartoonish Dixie sharecroppers into his version of Vincent van Gogh’s Dutch peasant cottages.[5]