Studio in a School: A Teaching Moment 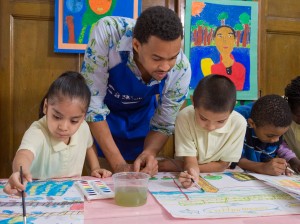 Studio in a School artist-instructor James Reynolds advises students at P.S. 196 in the Bronx. SARI GOODFRIEND

In 1976, New York philanthropist, art patron, and collector Agnes Gund read in The New York Times that art programs were being slashed from New York City public schools due to drastic budget cuts. Her response to the article was to found Studio in a School, a program that since its inception in 1977 has brought over 620 professional artists—including MacArthur-Award winner Pepón Osorio—into classrooms as teachers and creative role models for more than 800,000 New York City school children, 90 percent of whom are from low-income families.

“I thought that every child had the right to an arts program in their school,” Gund says, “not as a frill or an extra, but as a consistent thing taught really well as both an academic subject and a joyful pleasure.” To date, Studio has contributed over $90 million in services to students ages 3 to 23 at more than 700 locations, and is currently operating in over 150 public schools, daycare centers, community-based organizations, and museums.

“In art, there’s no right and wrong,” Gund continues. “If one child makes a rabbit that doesn’t look like the next child’s rabbit, that’s not a failure. I think art should be taught for its own sake, but it also can be brought into other subjects so easily. It helps with science, it helps with math, it helps with verbalization.” As she conceived her program, Gund felt that practicing artists would intuitively understand this integrated approach—and could benefit from a steady job with a flexible schedule that still allowed for their own studio time.

In partnership with the New York City Department of Education, Studio began training artists as teachers and then offering several candidates to each school, giving principals final hiring power. And while the program funds approximately 80 percent of the budget for administrative support, supplies, and ongoing mentoring for the students—with generous support from sources including the Robertson Foundation, the Wallace Foundation, and Estrellita and Daniel Brodsky—it asks participating schools to come up with the remaining amount. Requiring schools to make some financial commitment is something Gund was advised to do early on.

“If you give something away for free, you don’t get the community involved,” she explains. “Schools wouldn’t try to raise the money and interest the parents in it, or try to get teachers to understand how important the program is. This way, they have a real stake in it.”

Studio was piloted in three schools during its first year and was immediately embraced within the school system. Two years later, Gund hired Tom Cahill—a practicing artist who had been teaching art classes through the Brooklyn Museum—as the organization’s president and CEO, and he quickly expanded the number of schools the organization reached and the range of services it offered. In addition to its core program in kindergarten through 12th-grade classrooms, Studio now offers discovery-based initiatives for pre-kindergarten, Saturday workshops and apprenticeships for teens, courses in portfolio-development for students interested in applying to art school, and a summer internship program at museums for college students that is helping to bring more diversity to the field.

“We’ve developed expertise and a comprehensive art curriculum that really is broad across many schools and is relevant to many age groups,” Cahill says. In 2004, he was asked by the Department of Education to cochair a committee whose aim was to create a set of standards for arts education. The program, called the “Blueprint for Teaching and Learning in the Arts,” is now implemented throughout New York City public schools.

“Studio has been a motivator for the schools to hire,” continues Cahill, who sees it as a great achievement when Studio can cycle out of a school that then builds its own art program. To enable and support this, Studio now provides extensive professional development for artist-instructors who are being hired directly by schools.

Gund and Cahill strongly believe that visual intelligence permeates other academic subjects and aspects of life, and they have been keen to prove it. Since 2009, Studio has worked with the national consulting firm Metis Associates to study the actual impact of integrating rigorous visual arts education into the core curricula of high-poverty urban elementary schools. Preliminary results, which compare schools using the “Blueprint for Teaching and Learning in the Arts” to those that aren’t, show that the program is correlated with improvement among students in state literacy and math tests, greater job satisfaction from teachers, and more awareness from principals about art’s capacity to engage parents in their children’s academic development.

“Innovation and the arts go together,” says Cahill. “It’s part of the curriculum where there are multiple perspectives and multiple answers. We know that once kids are thinking and responding and asked to examine a work of art and describe it, they are using higher-order thinking skills. Those critical faculties are the things we’re saying are 21st-century workforce skills.”

Hilarie M. Sheets is a contributing editor of ARTnews.