The Precise Art Of Framing 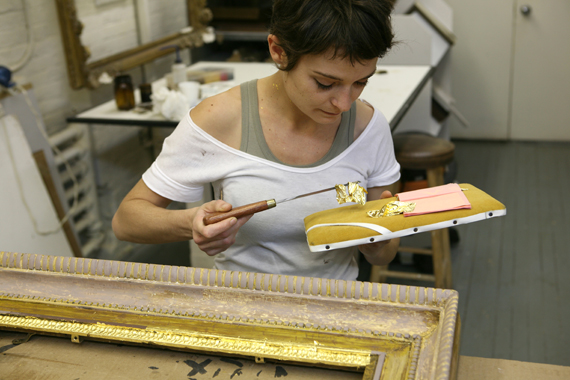 On a recent afternoon at Julius Lowy Frame and Restoration Co., a three-by-four frame sat on a work table, shining with freshly-applied gold leaf. The craftsmen at Lowy, as it’s known, still apply gold leaf by hand, a painstaking process that starts with coating a wood frame with successive layers of gesso, yellow clay, red clay and water. A gilder will rub a gilding brush on his or her forehead to coat it with oil and make it slightly adhesive, and pick up a sheet of gold with the tip of the brush. The gold leaf is so thin it wags erratically in the air, like a catfish yanked out of a river by an expert noodler. The gilder gently lowers the gold onto the wet surface of the clay. The molecular attraction of the wet clay bonds gold to the frame instantly, so the tiniest stray gesture could ruin it.

“Two and a half hours,” the glider said, sighing, when asked how long it had taken her to finish the frame.

Lowy CEO Larry Shar, a sharply-dressed man with the bald head and Brooklyn accent of Lloyd Blankfein, wasn’t impressed. He can afford to be patient with his 4,500 antique frame inventory. They get older and more valuable by the day. But he has to make sure that with the workers he pays by the hour—to restore old frames, craft new designs and reproduce antiques—are doing their jobs efficiently.

“The only correct answer to that question,” he told Huffington, “is not fast enough.”

For the last 105 years, Lowy has been one of the premier framers in New York, if not the world. When the Metropolitan Museum of Art acquires a new Velazquez, or the estate of Max Weber is putting on a big retrospective, or a Slovakian collector buys a $10 million Caillebotte, they go to the grand six-floor Lowy townhouse on East 80th Street to pick out a frame. They’ve most notably made the frames that showcase Van Gogh’s “Starry Night” and Cezanne’s “The Bather” at the Museum of Modern Art.

Most of Lowy’s frames were made in Europe, especially Spain, France and Italy, and sell for between $15,000-$50,000. One of the most valuable frames on hand right now, though, is American. Larry’s son Brad, who represents the third generation of Shars to work at Lowy, estimates it will sell for $150,000, probably to a “frame collector” who will display it as art object in itself—without a painting inside. Designed by 19th century architect Stanford White, the ornate, gilded number hangs hidden behind a thick grey velvet curtain in the Lowy’s showroom. Gold never tarnishes, and it remains a mark of prestige for many. (“Especially Russians,” Shar laughed.)

Lowy specializes in antique frames, which are found everywhere from antique stores in Europe to auction houses. Some date back as far as the 14th century. Shar particularly admires the Spanish and Italian frames from the 16th and 17th century in his collection, which are often painted black and red rather than gilded, and feature figurative rather than decorative accents. “They’re not so pompous, not so regal, so they appeal to a Brooklyn boy like me,” he explained.

When Larry first started working at Lowy, learning the ropes from his father Hilly, many of the company’s clients came from elite, old-money families like the Whitneys and the Rockefellers, whose collections dominate the walls of New York museums to this day. They were confident, idiosyncratic art collectors who chose frames from the gut, often with an eye to fitting in well with the rest of their decor.

But many of Lowy’s clients now think of paintings as investments more than beautiful objects. So they tend to choose frames that they think will make an artwork marketable. A frame’s historical accuracy is a selling point that translates easily from buyer to buyer, unlike its subjective aesthetic appeal.

“In today’s world, it’s more a thinking man’s game,” Shar said. “50 years ago, we’d put French frames on American 19th-century paintings. They were expensive paintings, so we’d put a fancy frame on it.”

But just because a frame fits a painting’s historical period doesn’t mean it’s the right one. For that reason, Shar sees historical accuracy as just one of many factors that should be considered when choosing a frame. The underlying principle, he says, is to strike a balance between “contrast and harmony.”

Shar notes that some bids for historical accuracy result in awful pairings. French impressionists, for example, would often fit gilded 18th century French frames from a century previous to their paintings—so it makes no sense to insist on a 19th century frame for a Monet today. Meanwhile, many mid-20th century American painters used low-quality frames for their artwork merely because they couldn’t afford better ones.

“If you want to put that kind of trash in your living room, around your multi-million-dollar painting, by all means, do it. But it seems like a pretty narrow-minded approach,” he said.

This story originally appeared in Huffington, in the iTunes App store.