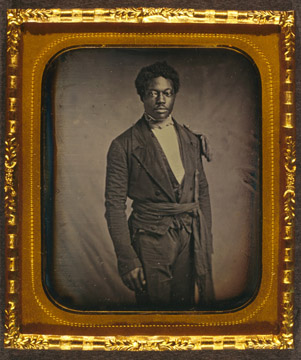 Imagine you are a young man of mixed-race heritage (African-American father and Asian mother) in 1840s America who wants to attend college but lacks the financial resources. What might you do to bring in money to support yourself? Augustus Washington (born 1820/1821) decided to try his hand at the new art of daguerreotype photography. Little did he realize that he was making a major career decision which would affect the rest of his life!

In the winter of 1843, Augustus Washington was enrolled in his freshman year at Dartmouth College when he turned to photography to earn some income. He soon left Dartmouth, and within five years had a thriving studio in Hartford, Connecticut. By 1850, he was a prosperous photographer and a husband. For many a man, the story might have ended there with the coda that he lived happily ever after. But, for Washington, it was just one chapter in an amazing man’s story.

In the 1850s, Washington realized that for the foreseeable future, despite his talents and accomplishments, he would be relegated in America to second-class citizenry at best, and possibly much worse in the climate of fear during the era of the Fugitive Slave Act. He began to consider emigration and decided to settle in Liberia under the auspices of the American Colonization Society. In November 1853, with his wife and two small children in tow, he sailed for Monrovia, Liberia.

With money saved from his business in Hartford, Washington set up a daguerreotype studio in Monrovia. In the two examples above, Chancy Brown the Liberian Senate’s sergeant at arms, is one of several portraits Washington took of Liberian legislators and executives. On the right is an unidentified woman, likely a member of the Urias McGill family, a rarity in the fact that it portrays a woman of color and interesting as she holds a daguerreotype case in her lap. In both portraits, it is striking how the subjects gaze seemingly unblinking, looking directly at the camera without an iota of self-consciousness or discomfort apparent.

Ever industrious, between bouts of malaria, Washington was soon a merchant and a landlord as well as a photographer. Then, he turned his attention to farming sugarcane and parlayed ten acres into a thriving 1,000-acre farm twenty miles upriver from Monrovia. He also found time to serve in the Liberian legislature, twice as a representative (where he was elected speaker) and one term as a senator. Upon his 1875 death, the African Repository noted his many accomplishments and prominent status concluding that “Nothing could induce him to return to this country [America], having acquired a handsome property and freedom and a home in his ancestral land.” How different might his story have been had he never picked up the camera!