Laylah Ali’s Greenheads Are More Than They Seem (VIDEO, PHOTOS)

Laylah Ali creates images which are as simple as comic books and as complex and hieroglyphics. Their flat, cartoonish aesthetic sharply contrasts their aggressive and ambiguous subject matter, creating an ambiguously violent viewing experience.

Ali creates both intuitive drawings, made in a process she likens to notetaking, and far more meticulous gauche-on-paper paintings, which can take months to complete a single work.

Her most well known collection is comprised of depictions of ‘greenheads:’ homogeneous, androgynous, dark-skinned characters. Power is a motif throughout Ali’s works, referring not only to racial history but also to one’s power over one’s own body, and an artist’s power over her creation. 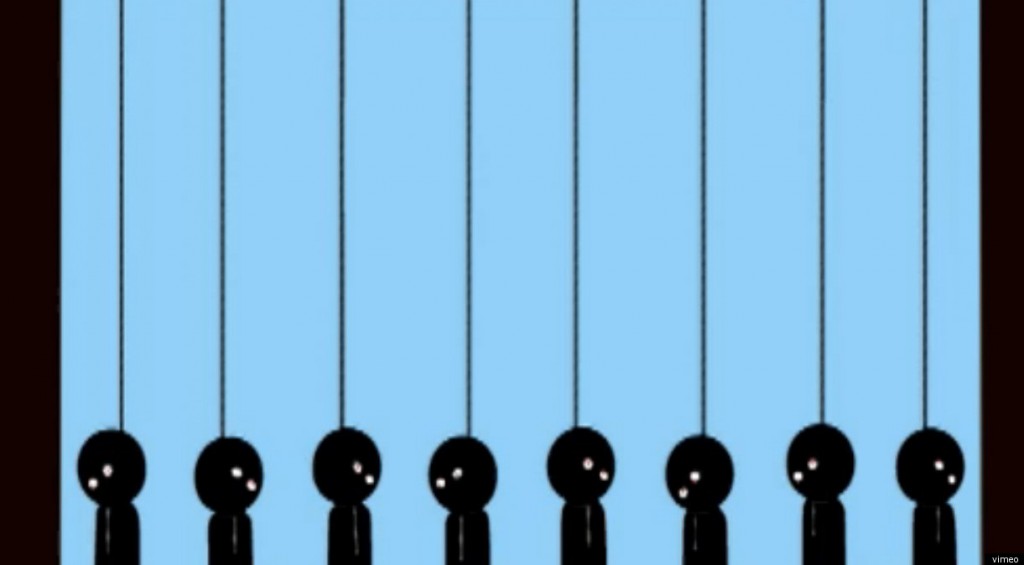 Ali’s works are difficult to get a firm grasp on, despite their initial appearance of simplicity. Their hyper-flatness gives off a first impression of egalitarian accessibility, but proves difficult when looking to find a ‘deeper’ meaning. The works operate more as codes then as clues; they refuse to give themselves up.

Even Ali hints that her characters escape the grips of her control. Though there are noticeable references to historical events, it is nearly impossible to ‘read’ Ali’s works definitively. They, not the viewer, hold the power.

By mixing innocuous everyday objects like Band-Aids, belts and dodgeballs with historically-loaded symbols like capes and nooses, Ali toys with our associations and how they affect the way we interpret an image. While a dodgeball game initially looks like an innocent childhood pastime, Ali’s personal recollection of being the only black child at an all-white school during a dodgeball games gives it deeper, more sinister, undertones.