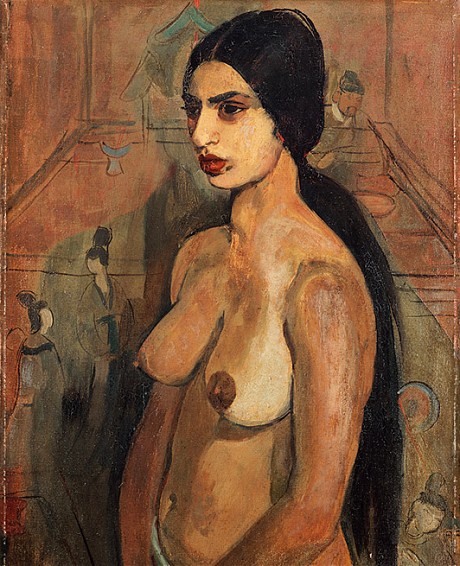 The painting, titled Self-Portrait as Tahitian, poses a question. If the artist isn’t Tahitian, nor, as her dark skin and full lips suggest, European, what are her origins?

In fact, this painting is the work of the important, but now little-known, 20th-century Hungarian-Indian artist Amrita Sher-Gil, whose brief and brilliant career ended with her tragic death at the age of 28.

Sixty years before Tracey Emin, Sher-Gil scandalised audiences around the world by putting women’s bodies – her own, her friends’ and those of ordinary Indians – at the centre of her extraordinary art.

By the time she died in 1941 her paintings were only beginning to become popular in India and in Europe. ‘I hate cheap emotional appeal,’ she declared as she went about challenging the clichés of the ‘exotic East’ – bejewelled figures posing in splendour with an elephant somewhere in the mix – with her truthful painting, full of the heat and dust of 20th-century India as it emerged from a century of British rule.

Often referred to as ‘the Indian Frida Kahlo’ because of the revolutionary way she blended the outlines of modern European painting with ‘primitive’ forms, Amrita led a life as compelling and unorthodox as her art.

What makes her story even more fascinating is that her early years were recorded for posterity by her father, a photographer – and offer insights into both Amrita herself and European and Indian high society in the 1920s.

Born on the eve of the First World War, Amrita Sher-Gil grew up in Budapest. Her parents were Marie Antoinette Gottesmann, a Hungarian opera singer, and Umrao Sher-Gil, a Sikh aristocrat with a deep scholarly interest in Sanskrit and astronomy.

The pair first met in 1912, while Marie Antoinette was touring Lahore, and the following year moved to her home city, where they were forced to remain until the end of the war.

The Sher-Gil family lived an unconventional life – one filled with grand political connections and glittering diplomacy, as well as intellectual enquiry and artistic endeavour. With so many people displaced during the war, the Sher-Gils were less conspicuous in Budapest than they might otherwise have been.

None the less, Umrao, who was an early adopter of camera technology, became fascinated by the way he could use home photography to document the unusual circumstances of his family. One of the earliest pictures of Amrita was taken in 1913 and shows Marie Antoinette sitting up in bed proudly, an extravagant bow in her hair and her baby swaddled in a froth of broderie anglaise. To one side of this deeply conventional tableau sits the proud father, neatly dressed in a conservative Western suit, incongruously topped with a turban.