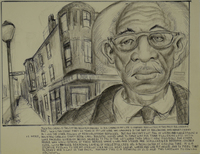 A story right out of reality television has unfolded for a young couple from western Massachusetts.  Last year the couple acquired the contents of an abandoned storage locker at a Boston auction.  Little did they realize at the time that the locker contained a selection of works by Allan Rohan Crite, dubbed in 2002 as  “the granddaddy of the Boston art scene” by the Boston Globe.   The works were the content of Crite’s studio that was put into storage in the 1990s when he became ill.  The works will again be put up for auction, this time at Grogan and Company, Fine Art Auctioneers and Appraisers in Dedham on June 16th.

The collection features a selection of autobiographical pencil sketches Crite began in 1975 documenting the African American experience. The first of the series is a self portrait of the artist bearing an inscription that begins with “Such big chunks of this city has become a memory. Such big chunks of my life is a memory…”  The series of eight narrative drawings bears a $7,000-10,000 estimate.

“As a visual artist,” Mr. Crite said in a 1998 interview with the Harvard Extension School Alumni Bulletin, “I am . . . a storyteller of the drama of man. This is my small contribution – to tell the African-American experience – in a local sense, of the neighborhood, and, in a larger sense, of its part in the total human experience.”  The collection of works includes mostly prints and drawings, as well as the artist’s personal documents and studio materials, including a mannequin and his mimeograph machines.

Another highlight of the collection is a double ink and marker drawing titled “A Few Words” and “More Words”.  The view of Crite’s Boston neighbors is signed and dated November of 1999, and is estimated to bring $4,000-6,000.  Many of Crite’s lithographs will also be available.

In addition to the works by Crite, Grogan and Company will be holding their Twenty-Fifth Anniversary Auction on June 16th, 2013, featuring a fine selection of Fine Art, Furniture and Decorative Works of Art, Silver, Jewelry and Oriental Rugs. “It is exciting to be celebrating our twenty-fifth anniversary with such a diverse and quality filled auction,” stated Michael B. Grogan, “With almost 800 lots, there will be a little something for every interest.”

The auction will be begin at 10:00 a.m. Sunday, June 16th, with a three-day exhibition opening on Thursday, June 13th.  For a fully illustrated catalogue or more information about Grogan and Company’s auction and appraisal services, visit www.groganco.com or call 781.461.9500.