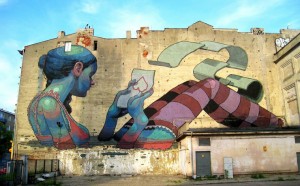 The city of Lodz in Poland is promoting the work of street artists from around the world as a way of creating a cultural re-invigoration of this city whose population is three quarters of a million. Begun in 2009, the Urban Forms Gallery has installed more than 20 large square paintings on elevations in the city center.

The public/private partnership and the addition of the artwork has attracted business and investment, and of course urban exploring tourists who can follow a map to see the works within a couple of hours. As a model for employing the talents of street artists to create public art in service of the re-invigoration of a city, this one appears to be very successful at respecting the work while adding value to a neighborhood, district, city, and community.

The roster of nearly two dozen works features international street artists like Os Gemeos from Brazil, Aryz from Spain, and Remed from France, along with one of Poland’s proud street art sons named M-City from Gdynia, a city three hours north of here, and two hometown local talents Bezt and Sainer from the ETAM Crew.