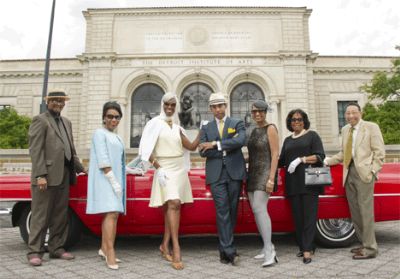 DETROIT, MI – Where were you during the summer of 1962? ‘…The Friends of African and African Art (originally-African Art Gallery Committee) formed a committee to acquire art to establish a new gallery dedicated to the traditional art of Africa. This is one of the oldest auxiliary groups at the DIA.

Its mission is to ensure that the artistic contributions will be enjoyed for future generations.’ The 2012 gala was held at the DIA with much of the glamour and entertainment replicated. Picture driving onto the circular drive of the DIA and greeted by gleaming classic cars – Red 1963 Ford Thunderbird, Black 1965 Chrysler Barracuda and a Red1963 Cadillac Seville. A group of guys were crooning under the streetlight. White tufted leather sofas were placed around the perimeter near the doors. Ladies and gents arrived dressed in glamorous attire from the ’62 era.

Inside, the scene was set to take you back to 1962. A female singing group dressed in black sequined dresses belted out Motown sounds as guests roamed with appetizers and champagne. Ladies completed their outfits with fur stoles, white gloves, beautiful floral prints, full-skirted colorful dresses with matching shawls and plastic purses. There was even a spotting of white patent Go-Go boots. Gentlemen were dapper in their choices of tuxedo jackets in many different colors and bow ties. Judge Stone did stand out in his sharp black sequined jacket, black bow tie and matching hat.

Sharon Madison, Chair of the Summer of 1962 extravaganza, introduced key participants and greeted the guests dressed in a beautiful blue dress complete with a matching shawl, white gloves and swirling curls. This was a very special event because of the milestone anniversary. There are plans to have a Techno Music event to attract more young people to join the organization, June 15, 2013.

Katherine Blackwell and other elders led the guests into the dining room where food and music set the tone for the party. The food stations did an excellent job of tempting the palate with Gourmet Mac & Cheese, short ribs of beef atop risotto, swordfish, Maurice salad and other mouthwatering dishes. The non fattening desserts included flaming Banana Foster, bread pudding, crème and berries, éclairs and …
Dancers stayed on the floor showing off their smooth moves while working off the calories. There wasn’t a wallflower in the place.

Two Anniversary cakes with fifty flaming candles topped the evening as guests sang Happy Anniversary to the tune of Stevie Wonder’s version of Happy Birthday. The Summer of 1962 was good, but the re-creation in 2012 was a big hit.