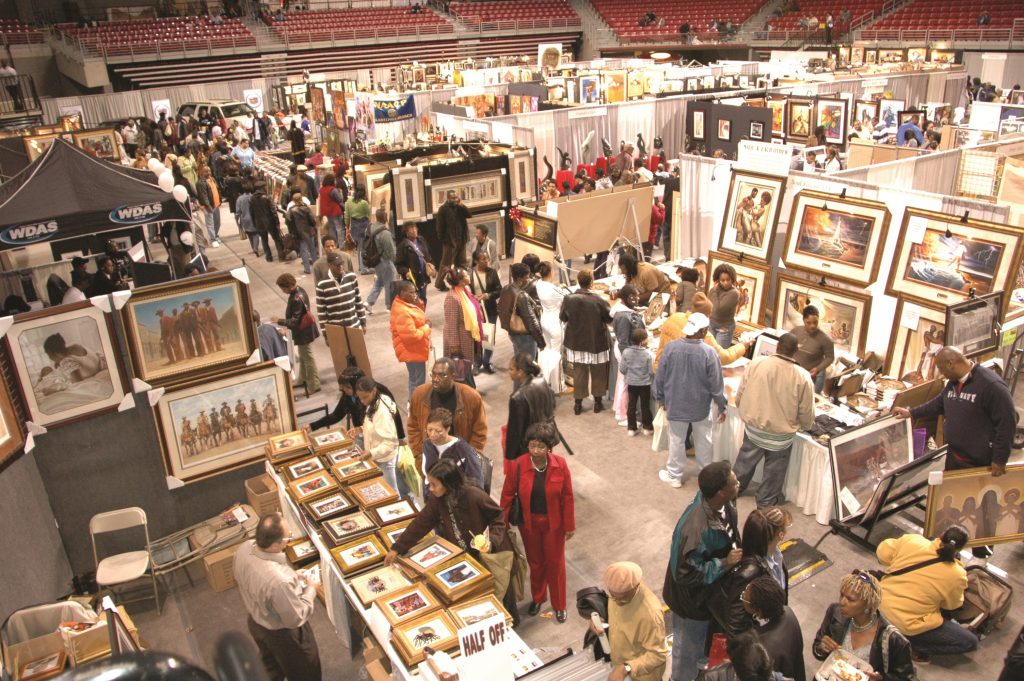 highlighted at Liacouras Center this weekend

By ROBERT STRAUSS For the Daily News

WHEN STEPHANIE Daniel was growing up in Boston, going to visit relatives on Martha’s Vineyard in Massachusetts every summer, the idea that there was an African-American art community was not really a part of her consciousness.

“Sometimes people just want art that, when they come home, they get to see someone who looks like them, but sometimes, they just want something hanging up there that they like,” said Daniel.

So a few years ago, when she saw a painting of Gay Head, a section of Martha’s Vineyard, that her friend Mercer Redcross had at his October Gallery in Old City, she knew she just had to have it. That it was painted by Chester-based African-American artist Sam Benson was just a plus.

Daniel is helping promote the 21st Annual October Gallery Philadelphia International Art Expo, Friday through Sunday at the Liacouras Center at Temple University, an event expected to attract more than 40,000 current and potential collectors of art of all kinds made by African-Americans.

To accompany the expo, Redcross and the October Gallery have produced “Connecting People with Contemporary African American Art,” a 500-page, full-color coffee-table book chronicling the rise of art and art collecting by African-Americans.

Daniel, for her part, thinks that rise came not from a push in formal art appreciation but from a less highfalutin form – the TV shows “Good Times” and “The Cosby Show.”

The main character on “Good Times,” which ran from 1974-79, J.J. Evans, played by Jimmy Walker, was an artist, but the art displayed on the show was mainly done by a seasoned painter, Ernie Barnes.

Then, from 1984-92, sets for “The Cosby Show” often had art of all types hanging on the walls in the family house.

“It became mainstream in African-American homes after that to have something on the wall, even if it was just a $15 poster,” said Daniel. “It was an image of sophistication we suddenly wanted to have.”

Still, people who wanted to buy original African-American art, particularly in Philadelphia, would have had a little trouble back in those days.

“Three months after going into business nearly 40 years ago, a gallery owner called to welcome me to the community,” said Sande Webster, whose eponymous gallery is at 20th and Walnut streets. “She said she had heard I was going to display black artists, and she warned me that if I did and black people would come to the gallery, then white people wouldn’t and I would go out of business.”

Webster said she ignored the advice and that when she has shown black artists – her gallery now is featuring Moe Brooker, an impressionist – she has had no problem attracting buyers.

“I would defy anyone coming in, year after year, to tell me what works were done by white artists and which ones were done by black artists,” said Webster. “I’m of the opinion that while art is surely the sum of the artist’s experience, it isn’t ‘black’ or ‘white,’ per se.”

There are those who disagree with Webster, though, and prefer to spend their collecting money that way.

Cheryl Oliver-Knight, a Philadelphia School District administrator, went to an exhibit of African-American art with a friend nearly 20 years ago and decided that she, as an African-American, should support that community.

“I had moved into a house instead of an apartment, so I needed to put things up on the bare walls,” said Oliver-Knight. She liked several small paintings of black angels, which went up around the house. Then, little by little, she started buying more colorful and larger works.

She has prints by national figures such as Californian Charles Bibbs and locals like Sam Byrd.

It was that sentiment that got Hal Sorgenti to start collecting African-American art.

When he and his wife, Lyn, were married, his father-in-law gave them two paintings by an unknown black artist titled “Wooing of the Twins in Blackville” and “Coaching Season in Blackville.” As much as he loved the paintings, Sorgenti, at the insistence of his wife, taped over “Blackville” on the paintings’ labels because she thought the term offensive.

“It was the times, so we wanted to be sensitive,” said Sorgenti, but as the 1970s and 1980s progressed, the Sorgentis sought out more African-American art. When he was CEO of ARCO Chemical Co. in the 1980s, and it moved to a new campus in Newtown Square, he insisted on putting art by African-Americans throughout.Because the art was not in demand, the company paid about $250,000 for 100 pieces.

When ARCO was sold to Lyondell Petrochemical in 1998, the new company didn’t want the art, so Sorgenti bought it himself for the original price and donated it to the Pennsylvania Academy of Fine Arts. It has recently been appraised at more than $3 million.

“Clearly, people appreciate African-American art more these days,” he said. Though he is white, Sorgenti said, the main buying public is black.

“Especially for the pieces dealing with the African-American experience, the crowd at the gallery will be black, and that is a good thing. Eventually, it won’t matter, but I am happy I invested in it long ago.”