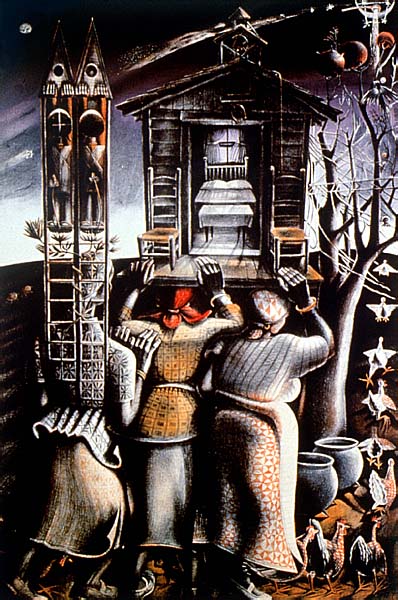 A pioneer in translating the heritage of African life into American art, Biggers developed potent spiritual symbols and geometric techniques to create a pictorial mythology. Born in 1924 in North Carolina, he began his career with realistic evocations of the black Southern experience and with murals in the Regionalist tradition of Thomas Hart Benton. After traveling widely in Africa in the late 1950s, Biggers welded archetypal motifs?e.g., Great Mother, masks, combs, water, drums?into a cosmic symbolism, producing an impressive body of paintings, drawings and sculpture that reflects his belief in the human community and its mystical interaction with the natural world. His lithograph Upper Room (1984) depicts two Southern women carrying on their wrapped heads a building?house, school, church?while alongside them a boy and girl climb toward the future on a vine?a hopeful narrative of solidarity and faith. Assembled by a variety of art scholars, this richly illustrated monograph documents a traveling exhibition that opened at Houston’s Museum of Fine Arts.
Back to Art for Sale