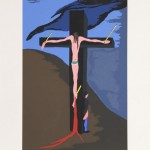 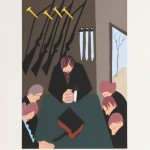 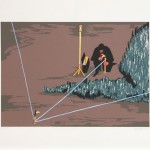 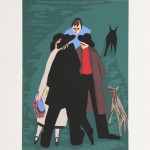 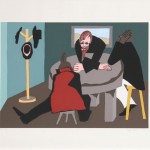 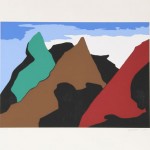 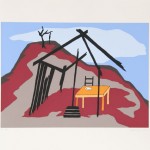 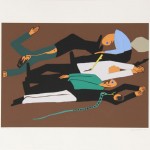 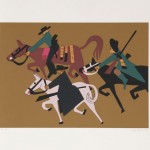 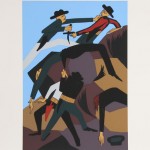 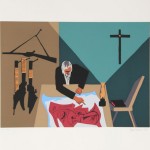 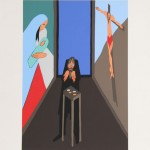 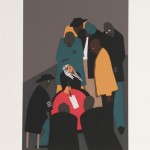 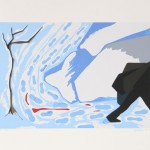 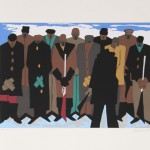 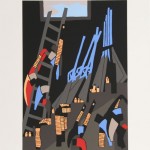 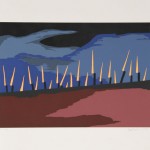 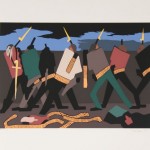 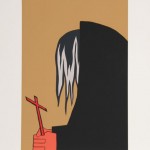 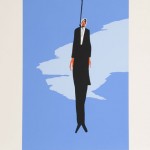 Jacob Armstead Lawrence is among the best-known twentieth century American painters of African descent. He was married to another artist, Gwendolyn Knight. He termed the style of his painting as “dynamic cubism” as influenced by the colors and shapes he observed in Harlem. His works are flat, bold, and abstracted but depict real, recognizable subject matter that contains messages or reflects memories. Lawrence was born in Atlantic City, New Jersey, but moved with his mother when he was thirteen, with his sister and brother to New York City. His mother enrolled him in arts and crafts classes in a settlement house in Harlem. Here he drew patterns with crayons and was recognized by an art teacher as one who had great potential. After dropping out of school at age sixteen, he worked in a laundry and printing plant. Yet he also attended classes at the Harlem Art Workshop taught by African American artist Charles Alston. This led to further art educational opportunities and a scholarship to the American Artists School and thence to a paid position with the Works Progress Administration.

In 1941 he married painter Gwendolyn Knight who he had met as a student in the Harlem Community Art Center. During WWII he enlisted in the U.S. Coast Guard and served on the first racially integrated crew on the USCGC Sea Cloud during which time he continued to paint. In 1970 he settled in Seattle to become an art professor at the University of Washington. He taught at many different schools during his long career. His paintings focused on the history and struggles of peoples of African origins in America across the nation. His famous Migration series depict the movement of hundreds of thousands of African Americans from the rural South to the North after World War I. This series brought him attention and fame. He was given his first major solo exhibition at the Museum of Modern Art and thus became the most celebrated American painter of African origins in this nation.

He continued to produce art until shortly before his death at age 82. His last work was a mosaic mural New York in Transit, installed in 2001 in the Times Square Subway station, N.Y. During his lifetime Lawrence was honored with many medals, retrospective exhibitions, and elected to fellowship in the American Academy of Arts and Letters. In 1998 he was awarded the Washington State’s highest honor the Washington Medal of Merit. In 1990 he was presented the U.S. National Medal of the Arts.