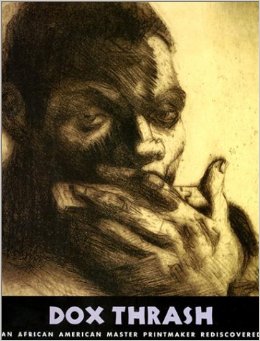 Dox Thrash came of age as an artist in the 1920s and 1930s, a time when art in the United States began to offer accurate reflections of everyday life. Throughout his career Thrash drew on personal experience for the striking imagery in his work, with scenes ranging from childhood memories of the rural South to hard times in the urban centers of the North, patriotic defense work during wartime, and poetic portraits of his community and its residents.Born in Georgia in 1893, Thrash left home at a young age and worked his way north to Chicago. After a decade of attending evening and day classes at the School of the Art Institute of Chicago, he spent the next few years living in Boston, Connecticut, and New York before settling in the late 1920s in Philadelphia, where he remained until his death in 1965.

During the early years of the Depression in Philadelphia, Thrash found part-time work as a graphic designer, while also beginning to make a name for himself as a painter. But it was as a printmaker that he would leave his most lasting mark. In the late 1940s he received national attention for his role in the launching of a new printmaking technique, the carborundum print, developed in late 1937 in the Fine Print Workshop of the Federal Art Project. a branch of the government-sponsored Works Progress Administration (WPA).

It is Thrash’s evocative carborundum prints that have most often been chosen for exhibition, both during his lifetime and after, but the artist was also a master of many other printmaking methods. Published here for the first time is an illustrated catalogue raisonné of all 188 prints Thrash is known to have made.

The four essays in this volume open windows on different aspects of the artist’s life, offering a historical overview of his training and career as a printmaker; an examination of the inner workings of the Fine Print Workshop in Philadelphia, the only WPA workshop devoted entirely to the produciton of limited-edition prints; a re-creation of the Pyramid Club, Philadelphia’s premier African American cultural and social institution in the 1940s and 1950s; and an investigation of Thrash’s use of African American themes in his work.