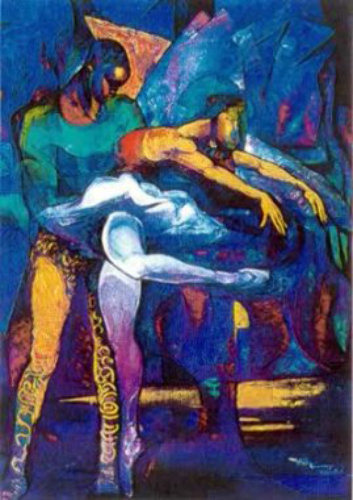 Artist Bio: 1951-2000 – Tolliver spent more than 30 of his 48 years perfecting his skill as a painter. Today, William Tolliver’s art is collected worldwide. Tolliver’s style freely combines the color of Chagall with the solid compositional principles of Cezanne and the mood and forms of Modigliani and Picasso. Tolliver’s words of wisdom for the young artist were, “I would urge an art student to go to school and learn the fundamentals, because to know the fundamentals is to know the technical aspects of blending colors.”

In an age when the rules of art had either been abandoned in favor of an anti-formalist attitude or had been institutionalized in academic study, William Tolliver emerged as a brilliant self-taught artist -a Mississippi-born Renaissance man whose creative intelligence combines the study of formal structure with an innate sense of human observation. Far from the marketplace of the New York City art world, Tolliver arose during the mid-1980’s a brilliant regional talent, an individual impelled by a desire to capture the landscapes and peoples of his native deep South. Whether dealing with everyday workers or back-alley jazzmen, he conveys a universal message through sconces of the common human experience. While plaintive in mood, Tolliver’s works evoke compassion with an underlying sense of expressive emotion. “I could draw on a lot of sad and depressing things from my life, but I’d rather emphasize the positive.” An artist of insight and natural ability, Tolliver is a deliverer of an artist message imbued with unique expressions and spiritual enlistment. Tolliver was born in Vicksburg, Mississippi. Although his mother worked in the cotton fields by day, she found time to rear and help educate 14 children. To stimulate their interest in learning, she often challenged William and his older brother to drawing contests. Discovering William’s talent, she borrowed art books from the library that exposed her son to the works of the European masters. His astute observation led him to study subjects from books, black-and-white photographs, nature, comics, and family members who posed as models. Since the local public schools did not have an art curriculum, Tolliver continued his course of self-study. From inexpensive dime-store watercolor sets purchased with money earned by mowing lawns, Tolliver learned to mix and blend colors by using a paint-by-number kit. Using this system he experimented with mixing color and skin tones and by the age eight was able to create academically correct paintings.
.

SOLD
Back to Art for Sale