ORANGEBURG, S.C. (AP) — Leo Twiggs’ paintings of shadowy Confederate flags and faceless men with bulls-eyes on their backs are a few of the haunting images he has developed living as a black man in the South.

The 80-year-old South Carolina artist says he hopes the works, which some may see as divisive, spark thoughtful reactions and help people understand their shared history, even for those outside the South.

“This Confederate flag, the Civil War, they are part of the history of all of us,” Twiggs said. “You take the stars off the bars, and it becomes a cross, maybe a railroad crossing. It can become a crossing over, something that we commemorate, and something we can cross over.”

Jovial and chatty at his Orangeburg studio, Twiggs said he is enjoying his best year as an artist. He’s had more than 70 solo shows over his career, and three new shows recently opened in his home state in Myrtle Beach, Greenville and Taylors.

Two of them highlight his use of Confederate flags — red, white, or blue smudged with brown or blood-red splotches. In several, the outlines of brown figures float in the background. Many flags are tattered, looking tired and rough. A black cow stands watch in some, recalling an animal Twiggs cared for as a child, growing up in segregated St. Stephens.

“We were poor, but we had dignity,” Twiggs said. “Ours was a struggle that speaks to a struggle experienced by all mankind.”

Sandy Rupp, owner of the Hampton III Gallery in Taylors, said Twiggs has been exploring flag images since the 1970s.

“He’s not trying to divide everybody,” Rupp said. “He sees it as a historic symbol, a symbol of white supremacy that he makes into his own. He makes it his flag, and gives it his power.”

As the aroma of hot wax fills the room, Twiggs uses a metal pen-like tool to drip warm wax on a rough piece of fabric. He colors it with hand-mixed vegetable dyes, and then removes the wax with an iron, repeating the process over and over. It takes up to a month to complete each composition.

William Eiland, director of the Georgia Museum of Art at the University of Georgia in Athens, said for many in the South, the flag represents “an unrepentant South, perhaps a South rising again.”

“But Leo takes that image and lets it mutate, change, degrade, adapt, into an image that becomes part of his experience,” Eiland said.

Twiggs said his “Targeted Man” series of faceless men bearing bulls-eyes harkens back to the Ku Klux Klan using white robes and burning torches “to try to scare us.” But once the nation came under attack in the Sept. 11 terrorist strikes, Twiggs said he realized the images also meant, “we are all targeted, we all have things to fear.” 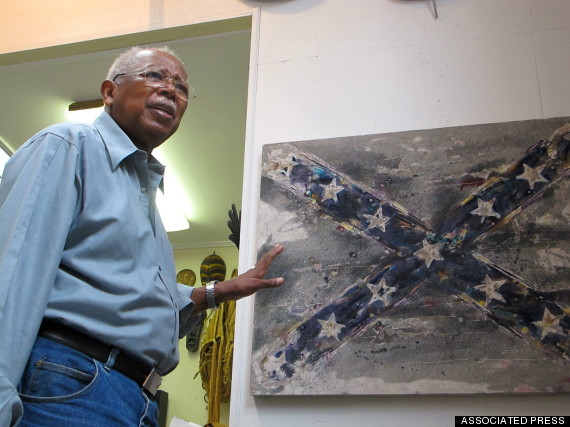