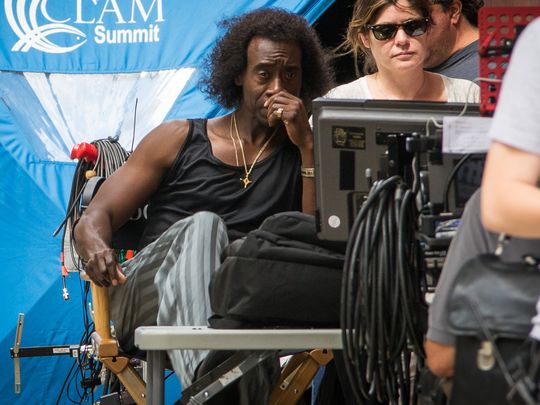 Cheadle, pictured on the Cincinnati set of ‘Miles Ahead’ in July 2014. The Miles Davis film is planned for release by Sony Pictures Classics next year. (Photo: Madison Schmidt, AP)

Unlike most films based on real people, Don Cheadle’s Miles Davis yarn is not a rags-to-riches fable about the pitfalls of fame (Straight Outta Compton), nor does it put certain milestones of his life under the microscope (Steve Jobs). Instead, the fragmented, freewheeling film reimagines the jazz icon as something of a drugged-up, chilled-out action hero: pulling pistols and throwing punches more often than he plays the trumpet.

Making its world premiere at the New York Film Festival’s closing night Saturday,Ahead was preceded by a short introduction from Cheadle, who directed, co-wrote and stars as Davis in the film. Detailing the decade-long process of bringing it to the big screen — made for under $10 million and funded in part through an Indiegogocampaign — Cheadle took a moment to thank the Davis family, many of whom were in attendance.

“Trying to encapsulate any human’s life on film and really represent the essence and spirit of who they are is a hugely daunting task, and would have been more so to be in a constant fight with the people who represent his legacy,” Cheadle said. “At the end of the day, we discussed, ‘Do you think Miles would’ve wanted a movie that hit all the benchmarks and made sure that we clicked every box of every important thing that he did? Or would he rather want to be the star of his own (expletive) movie?’ ”

Cheadle clearly goes for the latter in his directorial debut, set in the five-year period Davis spent out of the public eye in the late ’70s (a decade before his death in 1991at 65). Holed up in his New York home binging on pills, cocaine and liquor, he’s interrupted one day by a knock on his door from overeager Rolling Stonejournalist Dave Brill (Ewan McGregor, playing a composite character created for the film), who declares he’s writing a comeback profile.

After a slug to the face and some brusque chatter, Ahead becomes something of an offbeat buddy comedy between Davis and Brill as they buy cocaine in a Columbia University dorm, get loaded, and set off in search of a stolen tape recording, which culminates in a boxing-match beatdown and guns-blazing car chase. In write-ups about the film, critics have likened it to this summer’s End of the Tour and the Starsky and Hutch TV series, both of which are apt comparisons.

In a parallel storyline, Cheadle charts Davis’ blossoming romance and turbulent split from ex-wife Frances Taylor (Middle of Nowhere‘s Emayatzy Corinealdi), whom he beats and manipulates in the film’s most blistering scenes, which oddly received some uncomfortable laughter at the festival premiere. Glints of Davis’ brilliance onstage and in the studio are shown briefly, although for a movie about a musician, performances are few and far between.

So far, Ahead has earned mixed-to-positive reviews from critics. The Playlist‘s Rodrigo Perez compared the film’s erratic nature to jazz itself, but called it “ultimately uneven,” while The Hollywood Reporter‘s David Rooney praised Cheadle’s lived-in performance, saying he “nails the subject’s soft, nicotine-scratched rasp and his eccentric irritability and paranoia with discerning understatement.” Sony Pictures Classics has acquired the film for a planned 2016 release, although a date has not yet been set.