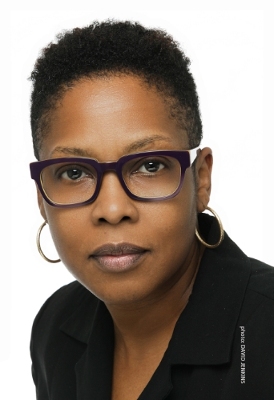 CHICAGO, Jan. 22, 2016 /PRNewswire/ — The DuSable Museum of African American History has a new chief curator – Leslie Guy, an arts consultant and curator of collections and exhibits for museums and private collectors in Philadelphia.

Born and educated on the East Coast, Guy is the former director of curatorial services for the African American Museum ofPhiladelphia. She said she was drawn to Chicago by its robust arts and culture scene and the chance to tell the city’s unique history through a contemporary lens. She officially joined the DuSable’s leadership team last Friday. Guy hit the ground running as the museum gears up for its latest exhibit The DuSable Masterworks Collection – Series 1: Paintings opening February 9 in its new Masterworks Gallery.

“I’m delighted to welcome Leslie to the DuSable and to Chicago,” said Perri Irmer, DuSable Museum President and CEO. “Leslie’s dynamic and innovative approach to the arts is perfectly aligned with my forward-looking and collaborative vision for the DuSable. I am so delighted that she is part of our leadership team. She comes to DuSable with respect for this institution and what it means to the community and committed to advancing our mission. We’re looking forward to great things!”

Guy comes to DuSable at an exciting time for the community landmark. Irmer, four months into her tenure, has made good on a promise to cross-pollinate exhibits with multicultural organizations. Last fall, DuSable partnered with the Holocaust Museum in Skokieto present the play “Anne & Emmett” and will again in February for the exclusive Chicago Work In Progress Screening of Olympic Pride, American Prejudice, a documentary about 18 African American Olympians at the Berlin 1936 Games. The film is narrated and executive produced by actor Blair Underwood, who will take part in a panel discussion following a VIP screening at DuSable onFebruary 25.

Through the Masterworks series, DuSable will roll out a treasure trove of gems from its vast collection, many which haven’t been publicly viewed in years.

“DuSable has a really rich collection, and I’m looking forward to bringing those collections out of the storage areas and into the public view,” Guy said, adding she intends to have an active collection schedule. “There are some wonderful pieces; I was amazed. Everywhere I looked, there was something marvelous.”

The museum is also undergoing aesthetic improvements to its main lobby during the first half of 2016. And in February during Black History Month, DuSable will introduce an interactive, audio/visual exhibit in the story corps tradition to capture the oral histories of black families.

“Museums should be interactive, a place where the public can participate and truly engage,” Guy said. “I also want to have a deeper connection with the community and want people to feel welcome to come in and share their stories and to feel like DuSable is their home. I don’t want people to have a passive experience.”

Her career has included stints as a private consultant on conservation treatments for exhibits and private collectors. But the bulk has been spent overseeing museum collections, exhibits and education and community engagement. She piloted a school-based arts education program in Philadelphia targeting low-income students and was lauded for cultivating a culture of inclusion at the museum. She recruited community residents to be a part of a team she led to develop a strategic plan to raise the museum’s visibility, resulting in higher attendance and donations.

Guy describes her approach to curating exhibits as “hyperlocal” but global in scope, outreach and viewpoint. She tends toward exhibitions that relate back to contemporary themes. In her previous role, she curated shows such as Legendary, a photographic exhibit that celebrates the artistry of the ball culture of the African American and Latino, gay and transgender communities; Badass ArtMan, featuring the artwork and collection of Danny Simmons, brother of Russell Simmons and one of the most important collectors of African American art in the country; and the work of sculptor Syd Carpenter, which reflects African Americans’ historic relationship to the land,  the disappearance of black family farms, and ways in which people are continuing the tradition of farming in the 21st century.

“Chicago is a really dynamic city with a strong African American tradition and really strong history, especially when it comes to art. My vision for DuSable is to really tell the stories that highlight the city’s rich history and the ties between contemporary stories such as Black Lives Matter. That movement is an example of present day harkening back in time. The devaluation of black lives has been consistent throughout our history. Today, as in the past, we view this conversation through an artistic as well as a historic lens. The story might look different but it’s the same.”

Guy earned her master’s from the University of Delaware and has spoken at museum and conservation conferences in Atlanta andPhiladelphia.

“Over the next coming year,” Guy said, “I hope that we begin to tell stories that are really important to Chicagoans. And that people come to recognize that we’re deeply committed to telling those stories and be an active and engaged member of the community.”