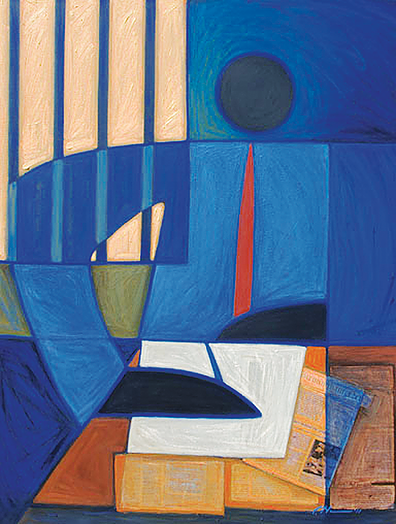 JOSEPH HOLSTON is an American painter and printmaker who works from his studio in Takoma Park, Maryland.

Holston’s visual narrative “Color in Freedom: Journey along the Underground Railroad,” completed in 2008, and consisting of 50 paintings, etchings and drawings, has been on tour since 2009. It was exhibited in 2010 at the United Nations in Geneva, Switzerland. The eighteen etchings from “Color in Freedom” are included in the collection of the Library of Congress. “Color in Freedom: Journey along the Underground Railroad” is also the recipient of a grant from the National Endowment for the Humanities. Holston’s work is also included in two additional traveling exhibitions: “African American Art since 1950,” and “Convergence: Jazz, Films and the Visual Arts,” organized by the David C. Driskell Center at the University of Maryland. The screen print of his painting “Letter from Birmingham Jail,” commemorating the 2011 dedication of the Martin Luther King National Memorial in Washington, D. C., is in the collections of the Library of Congress and the Federal Reserve Board.

“His work celebrates life in all its phases….And while one can see influences of European and modern masters in Holston’s oeuvre, his art is wholly autographic. In other words, when one sees a Holston one knows it’s a Holston.”—Lisa Hodermarsky, The Sutphin Family Associate Curator of Prints, Drawings and Photographs, Yale University Art Gallery, New Haven, CT (2011)