Living My Dream: An Artistic Approach to Marketing by Synthia SAINT JAMES 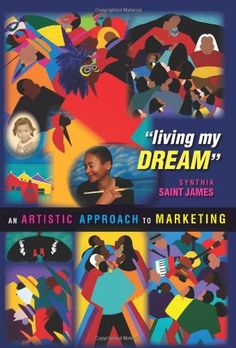 About the author:Synthia SAINT JAMES Synthia SAINT JAMES is a world renowned multicultural visual artist, award winning author/illustrator of 17 children’s books, 2 poetry books and a cookbook. She is also popular keynote speaker and architectural designer who has garnered numerous awards over her forty plus year career, including the prestigious Trumpet Award, her first Honorary Doctorate Degree from Saint Augustine’s College and NAWBO-L.A.’s Hall of Fame Inductee Award all in 2010.She is most celebrated for designing the first Kwanzaa Stamp for the United States Postal Service in 1997, for which she received a History Maker Award, and for the international cover art for Terry McMillan’s book Waiting to Exhale. In 2010 she was commissioned to paint two new awards. The first was created for the “Mosaic Woman Award”, one of which was presented to Dr. Maya Angelou on October 28, 2010 in National Harbor, MD. The second was created for His Excellency Nelson Mandela’s for a Lifetime Achievement Award from Africare, which was accepted for him by his daughter and grandson on November 5, 2010 in Washington, DC.On the evening of Monday, May 23, 2011 at the Providence Health & Services Excellence Awards Dinner in Seattle, WA, 10 Limited Edition Remarques of her painting, “Sisters of Providence”, were unveiled and auctioned off. An amazing $126,000 was raised from this Live Auction for the Sisters of Providence Mission in Chile. The amount was then matched by a corporation for the total of $252,000.Synthia SAINT JAMES, who has just completed her new book titled Living My Dream: An Artistic Approach to Marketing, is currently touring colleges and universities nationwide as a speaker, exhibitor and workshop facilitator. She is also working on several new paintings including commissioned artworks.
Authored by Synthia Saint James

World renowned visual artist Synthia SAINT JAMES shares her life’s journey in the pursuit of the arts, along with marketing tips and affirmations, in this her latest book..
Offered at $20.00