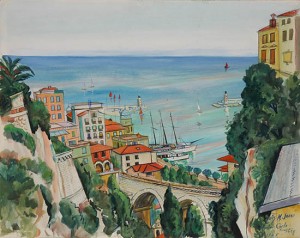 Weschler’s Auctioneers is pleased to offer a compelling selection of African American Art featuring the Collection of Reverend Douglas E. Moore and Dr. Doris Hughes-Moore on February 26th, 2016. This specialized sale focuses on the works of modern and contemporary African American artists including one of the largest private collections of prints by Elizabeth Catlett.

The Moores’ comprehensive collection of prints by Elizabeth Catlett, Romare Bearden, Jacob Lawrence and John Biggers is an all-encompassing visual representation of the changing landscape of black life in America from the 1940s to the early 21st century. Works such as In Other Folks Homes ($2,000-$4,000) and I Have Given the World My Songs ($1,500-$2,500) by Elizabeth Catlett illustrate the turbulent time of the integration of African-Americans into a predominantly white urban society while her Torture of Mothers ($800-$1,200) and Angela Libre ($1,500-$2,500) reflect the ongoing civil rights movement of the 1970s. The Builders ($4,000-$6,000) and Windows ($3,000-$5,000) by Jacob Lawrence depict the great urban migration of the 1940s while various works by Romare Bearden take on Greek legends and folklore.

Additional works in the sale include Lois Mailou Jones’ Monte Carlo ($8,000-$12,000), a stunning watercolor completed during the artist’s honeymoon in Europe during the 1950s. Two small portraits by Charles Sebree display the influence of artists such as Georges Rouault. Green Seascape ($2,000-$4,000) by Richard Dempsey is richly painted in swirling impasto and three landscapes by Anthony Watkins display serene landscapes in the European tradition. Washington D.C. artist Martha Jackson Jarvis’s sculpture Grandfather’s Red Hot Chili Peppers ($5,000-$7,000) will be featured as well. Jarvis is locally known for her installation at the Anacostia Metro Station.

Weschler’s is proud to auction these works in the city where many of the artists represented were educated and flourished. Washington D.C. has long been home to some of the greatest African American artists, and we are glad to share their work.