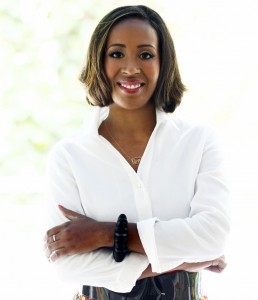 by Carolina A. Miranda

Curator Naima Keith, who for five years helped organize lauded exhibitions at the Studio Museum in Harlem, has been named the new deputy director for exhibitions and programs at the California African American Museum  in Los Angeles’ Exposition Park. The move brings a nationally recognized curator to the institution, which organizes artistic and historical exhibitions related to African American life in California and beyond.

“She was the top candidate,” says the museum’s executive director George Davis. “She was so impressive. And I really feel that the California African American Museum will have a great vision as a result of her presence.”

In her time at the Studio Museum in Harlem, Keith curated the traveling exhibition“Charles Gaines: Gridwork 1974-1989,” the first museum survey devoted to the early works of the L.A.-based abstractionist, which opened at the Hammer Museum early last year.

The show received a nomination for “Best Monographic Museum Show in New York” by the International Assn. of Art Critics — competing against exhibitions at the Metropolitan Museum of Art and the Museum of Modern Art.

Moroever, she organized “Rodney McMillian: Views of Main Street,” scheduled to open at the Studio Museum in March, the first major solo museum exhibition devoted to the work of the Los Angeles sculptor and installation artist.


Keith’s hire brings a ray of good news to CAAM, a small, largely state-funded institution that had been without a director for roughly a year since long-time director Charmaine Jefferson stepped down in July of 2014.

Davis, whose background is in broadcasting and media, was named executive director last summer, after serving as interim director. He says that his first seven months on the job have been focused on institutional upgrades.

“It’s been about improving infrastructure, getting IT — the technology — upgraded, getting marketing and social media approved and launching a millennial council that will help us draw younger visitors to the museum,” he says. “It’s stuff that doesn’t necessarily show up on the wall.”

He says Keith’s hire will help transform the museum’s exhibition program and will be key to drawing new and expanded audiences. He also expects that her presence will be a boon to fundraising.

Though the museum is state-funded, those funds generally account for less than $3 million a year. A separate not-for-profit foundation arm helps raise additional funds, but in recent years, those fundraising efforts had been rather moribund in the wake of the recession. (The foundation’s assets, which had historically topped $1 million until 2007, dipped to $200,000 by the middle of 2012.)

“Most of our visitors are 40-plus, the usual suspects,” says Davis. “Naima is someone who is really relevant to the world of contemporary art. She has a national presence. … She was the missing piece of the vision. And her hire really sends a statement to the community that we really are the new CAAM.”

For Keith, this will represent a return to Los Angeles. The curator is an L.A. native who received her master’s at UCLA.