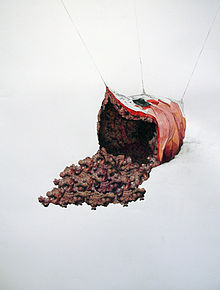 Ebony G. Patterson is a Jamaican artist born in Kingston, Jamaica in 1981. She has taught in the Edna Manley College of Visual and Performing Arts, the Sam Fox College of Design & Visual at Washington University in St. Louis. She has taught at the University of Virginia and is currently an Assistant Professor in Painting at the University of Kentucky She has shown her artwork in numerous solo and private exhibitions, such as Infinite Island: Contemporary Caribbean Art, Brooklyn Museum, (2007). National Biennial, National Gallery of Jamaica,(2006,2008,2010),Ghetto Biennale , Port-au-Prince, Haiti,Rockstone and Bootheel, Real Artways, (2010) Wrestling With the Image, Museum of the Americas,(2011). Ms. Patterson is represented by moniquemeloche gallery.

Patterson’s work revolves around questions of identity and the body, and takes the form of mixed media paintings, drawings and collages, most of them on paper. Photography, found objects, installation and performance have recently become increasingly important in her practice. Early work was primarily concerned with the female body as object. Her Venus Investigations objectified the female torso, headless and anonymous, and explored the relationship between the ample-bodied “Venus” or female goddess images of prehistoric times and contemporary female self-images and beauty ideals. Subsequent works more provocatively focused on the vagina as an object and, by implication, examined the taboos that surround this body part and its functions within Jamaican culture. This also led to 3-dimensional constructions made from intimate female articles such as sanitary napkins and tampons and more abstracted and surreal hybrid organic forms that appeared in her large paper collages of 2007. This early body of work has a sober and at times even majestic visual beauty which as she puts it, references “beauty through the use of the grotesque but visceral, confrontational and deconstructed.” 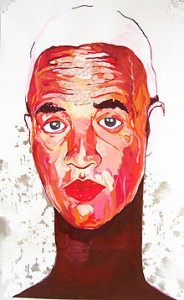