Cecil, a celebrated artist, educator, and tenor, will share with you his insights in a rap session on Saturday evening and then work with you on your personal pieces in a workshop on Sunday morning.

Born in the parish of Hanover in 1946, he was one of the first graduates of the full time diploma programme of the Jamaica School of Art (now the Edna Manley College of the Visual and Performing Arts) in 1966.  He was to return to the Jamaica School of Art to teach painting in 1980, becoming the head of the department the following year. However it was his talent as a classical musician that won him a Jamaican government scholarship to study music in New York in 1970. His sojourn in New York allowed him the opportunity to hone his skill in the visual arts. In 1976 he obtained a Bachelor of Fine Arts degree from the School of Visual Arts, and later in 1993 the Master of Fine Arts degree from the same institution. 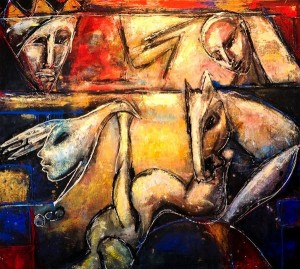 One of Jamaica’s most recognized artists, over the years in solo and group showings Cecil has exhibited in Jamaica and overseas in the USA, Canada, Germany, Central and South America, and the Caribbean. His writings have been published in newspapers, newsletters and other publications in Jamaica and the USA. In 1993 he was awarded the Bronze Musgrave Medal for his contribution to painting and art education in Jamaica.

In describing his work, the Savacou Gallery in New York in 2003 identified two trends: “One is the muscular dramatic, expressionist style he uses in his large canvasses and mixed media works on paper. The other is a graceful sensual style that is characteristic of his small works and painted objects”.