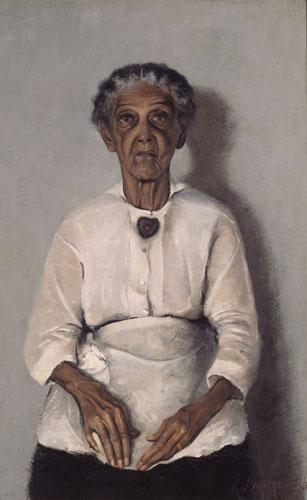 COME SPRING, VISITORS TO WASHINGTON, D.C.’s National Gallery of Art will have the opportunity to view “Portrait of My Grandmother,” by Archibald Motley (1891-1981). The 1922 painting was Motley’s favorite. In Southern California, the Los Angeles County Museum of Art (LACMA) is presenting another family portrait. Motley’s “Uncle Bob” (1928) is expected to be mounted later this month. Both paintings are on loan from the Motley family.

As the traveling retrospective, “Archibald Motley: Jazz Age Modernist” was coming to a close last month, Valerie Gerrard Browne, the artist’s daughter-in-law and caretaker of his legacy, said she was hoping to place some of Motley’s paintings in museums across the country.

Chicago-based Motley first came to prominence in the 1920s. His expressive oeuvre includes vibrant social and cultural scenes of Chicago, Paris and Mexico and dignified portraits of his family and Chicago’s African American working class and elite. An understudied artist whose visibility doesn’t reflect his early critical recognition, the exhibition has significantly raised Motley’s profile.

In the final days of the exhibition, the Whitney Museum of American Art, where the show was on view through Jan. 17, announced it had acquired “Gettin’ Religion,” a 1948 Chicago street scene that was on view in the exhibition. The painting is the first Motley work to come into the museum’s collection.

In an effort to ride the momentum of “Jazz Age Modernist” and ensure Motley’s rightful place in the art historical canon, Browne continued to gauge interest from institutions around the country. So far, two important museums, on opposite sides of the country, have recognized the significance of Motley’s practice, his portraits in particular, and have each accepted paintings on loan.

“I am so happy there is interest in the portraits because they are superb… I think the portraits now are going to start to get the attention they deserve.” — Valerie Gerrard Browne

AT THE NATIONAL GALLERY OF ART, Anabeth Guthrie, a museum spokesperson, confirmed the loan.

“We look forward to hanging Archibald Motley’s painting ‘Portrait of My Grandmother’ this spring and we are grateful to Ms. Browne for her generous loan,” Guthrie says.

The painting of Motley’s grandmother likely meant so much to him because he had an enormous affection for her.

“The grandmother that I painted was on the paternal side,” Motley said in a 1978 oral history interview with the Archives of American Art. “She was the one I think I told you I cared so very, very much about. She was a very kind person, a nice person, she had so much patience. I’ve always hoped that I could continue her teaching that she taught me when I was young. I think I’ve done a pretty fair job of it because I still have the patience of Job not only in my work but I think I’ve it with people,” 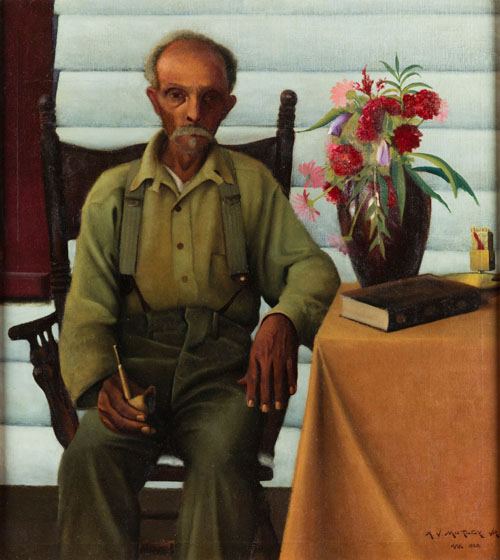 AN OIL ON CANVAS, “Uncle Bob” was painted in 1928, the same year Motley was honored with the Harmon Foundation Gold Medal. He had an exhibition of his paintings at the New Gallery in New York (Feb. 25-March 10, 1928) that year, too. The cover of the catalog described the show as “the first one-man exhibition in a New York art gallery of the work of a negro artist…”

I asked Browne if she knew anything about the painter’s Uncle Bob, if she could shed any light on his life. She says she has limited information. She knows he lived in Arkansas and was a farmer, but she is not sure if he owned his land or was a sharecropper.

“My understanding is that he was Robert White, the half-brother of the artist’s mother, Mary (Mae) Frederica Huff Motley Hill,” she says. “He was born into slavery and had a different father than Mae who was born in 1870 after Emancipation. I do not know who his father was. Mae’s father was a white man who was connected with the plantation-owning family in whose home her mother continued to work taking care of children after slavey ended.”

Depicted on a porch of his home in Pine Bluff, Ark., Uncle Bob’s suspenders and what appears to be a corn cob pipe are balanced by the refined symbolism of a book, perhaps an indication he could read, and floral arrangement on the table beside him.

According to “The Art of Archibald J. Motley, Jr.”

(Chicago Historical Society, 1991), Uncle Bob was about 90 years old when Motley painted him in 1928. The exhibition label that accompanied the portrait in “Jazz Age Modernist” states that he died two years later.

LACMA, where the exhibition was on view Oct. 10, 2014-Feb. 1, 2015, confirmed that “Uncle Bob” would be delivered in early February, and the painting is expected to be installed later this month.

“Motley started as a portrait painter and was one of the best. This portrait of his uncle is a sensitive rendering of an elderly man who has a sense of dignity despite his long and possibly hard life,” says Ilene Fort, senior curator of American art at LACMA.

“Motley started as a portrait painter and was one of the best. This portrait of his uncle is a sensitive rendering of an elderly man who has a sense of dignity despite his long and possibly hard life.”
— Curator Ilene Fort, LACMA

In an earlier interview, Browne told me that there were paintings in the family collection that the artist wanted to hold onto, primarily portraits with sentimental value, including paintings of Motley’s wife, mother and father. I asked Browne, whether she would be willing to part with “Portrait of My Grandmother,” given it was Motley’s favorite and hers too.

“You have sensed how torn I feel about parting with this painting. Though I love it dearly, I also believe it belongs to the nation because there are so few, if any, beautiful, dignified, loving portraits of formerly enslaved women in museums. She is representative of so many whose history deserves to be told,” Browne says.

“I will be loaning the painting to the National Gallery of Art, the nation’s museum, where millions of people can see, appreciate, and be inspired by it, free of charge.” CT