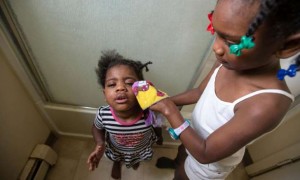 When Nakiya Wakes moved to Flint in mid-2014, school wasn’t an issue for her seven-year-old son, Jaylon Tyson. During the intervening school year, Tyson was suspended once. This year, the number of suspensions ballooned to 56.

Wakes, 40, doesn’t know what else to blame but Flint’s water source.

“I believe it’s the lead exposure … we’ve been here two years, so we’ve had two years of exposure,” she said. “And I think I’ve seen his behavior change dramatically.”

In November, Wakes had Tyson’s blood-lead level tested: it registered at a concentration of 5 micrograms per deciliter of blood, a level deemed by the Centers for Disease Control and Prevention to be “much higher than most children’s levels”. Her daughter, Nashauna Scott, 16, also registered at 5 micrograms.

But even now, Wakes doesn’t know with certainty the source of her children’s problems.

A lack of data, the extreme limits of lead blood testing and dueling assessments of lead exposure have all compounded to complicate what may be one of the greatest long-term threats as Flint, Michigan, reels from its water contamination crisis: the potential impact on thousands of young children in the city.

Shauna Phillips, a teacher at the University of Michigan-Flint’s early childhood development center, says she has noticed her two-year-old son has developmental delays.

“It’s hard to say that was related to the water, or whether that was just how he was born,” she said.

Flint’s water became contaminated with lead in April 2014, after a state-appointed emergency manager switched the city’s water source from Lake Huron to the local Flint river. State regulators failed to require the addition of corrosion control agents, allowing lead to leach off pipes and flow into households. A taskforce investigating the crisis concluded this week in a lengthy report that state officials – chiefly, the office of Michigan’s governor, Rick Snyder – are to blame for the water crisis, which it unequivocally called a “case of environmental injustice”.

Decades of studies have shown elevated blood lead levels can stunt mental growth in young children, and, in high concentrations, later lead to delinquent or sometimes violent behavior. In the classroom, low blood-lead levels in a child can translate into lower reading and math scores. Many experts say no level of lead is safe for children.

But the scope of just how Flint’s children are affected may not be fully understood for some time, if ever. It’s unclear if lead exposure has already had a noticeable impact on Flint’s public school system. The district has not released reading readiness and math test scores for years after 2012-2013. Widespread blood lead tests have not yet been released, and even when they are, they only reflect exposure from the previous 30 days, and don’t suggest what symptoms and impact lead exposure may have had.

Compounding the situation in Flint, where over 40% of the predominantly black population lives in poverty, is that long-term neurological problems could also be attributed to a multitude of circumstances – poverty, poor nutrition, low-quality schools.

“One will not be able to say if the issues identified were due to the lead or not,” said Dr Helen Binns, a Northwestern University professor of pediatrics and preventive medicine, in an email. “Plenty of children are identified with developmental issues that do not have lead exposure. Lead can be a contributing factor, but is not the only factor.”

Still, state officials have advised that children under six in the city – roughly 8,000 to 9,000 in total – should be treated as having been exposed, as many parents come forward with stories about their own kids. And officials haven’t signalled the water is yet safe to drink.

Melissa Mays and Lee-Anne Walters say their children have had noticeable changes since the city’s water supply was switched from Lake Huron to the local Flint river. Walters’ son Gavin has developed speech impediments. Mays, a plaintiff in state and federal class-action lawsuits filed in response to the crisis, says her son’s grades have slipped.

Outside a hearing in Washington DC last month, Flint native Tammy Loren, 36, said her four children – all boys, aged 10 to 14 tested positive for elevated blood lead levels. One of her children has a cognitive learning disorder, attention-deficit disorder, and registered the highest lead level among his siblings: 23 micrograms per deciliter of blood. A 2005 study that analyzed children in an Ohio county and found blood lead levels that high translated into $500,000 of excess costs for annual special education and juvenile justice, according to the CDC report.

“All this did, it affected not only the kids, it’s affected everybody,” Loren said.

© Provided by Guardian News Lee Anne Walters says her children have suffered noticeable changes since the water supply was switched to the Flint river.

Citywide blood test results haven’t yet been released. But when they are, they could dramatically underestimate the number of affected children in Flint. Dr Mona Hanna-Attisha, a pediatrician at Hurley Children’s hospital whose research forced Governor Snyder’s administration to address the water crisis, says lead is only detectable for up to 30 days. If children stopped drinking Flint’s water months before a test, an elevated blood lead level might not be revealed , but previous exposure could mean the damage goes undetected.

Wakes said as much about her children’s test results. The family hasn’t consumed tap water in months, but a recent test showed Tyson still had a lead level of 3.3 micrograms per deciliter.

“They were already at 5.0, there’s no telling what they were at in 2014, when they should’ve been telling us about this situation,” Wakes said. “They can’t tell us what’s going to happen long-term to these children.”

Similar stories have been shared by many of Flint’s vocal residents, who have vehemently criticized the Snyder administration for delaying a response to the crisis. Almost immediately after the water source changed, residents complained about tap water that was discolored, odorous, and, they said, caused skin rashes, among other ailments.

Following the switch, the percentage of Flint children with elevated blood lead levels doubled to about 5% in total, according to research by Hanna-Attisha. The Michigan department of environmental quality didn’t require the city to treat the water with anti-corrosion agents, which allowed lead to leach off pipes and contaminate tap water.

Studies on lead and educational outcomes have shown a blood lead level of 5 micrograms per deciliter, the levels of Wakes’ kids, could mean a child is “more likely to be non-proficient in math, science, and reading”, according to a CDC report released last April. A separate study cited in the report found children with that blood lead level scored 4.5 points lower on reading readiness tests. For children with concentrations above 10 micrograms, the report stated, it could result in significantly lower academic performance test scores in fourth grade.

But Kim Dietrich, a University of Cincinnati professor of environmental health and senior author of the CDC report, said in an email that the long-term consequences of chronic lead exposure have been observed at “blood lead concentrations … several levels of magnitude above those presently observed in Flint”. The “greatest” risk to Flint’s children is probably not from the water supply, he added, but from “the very old stock of housing in the areas of interest where lead paint residues present the most important dangers for developmental neurotoxicity”.

“The term ‘lead poisoning’ has been vastly misused by the press during this event,” Dietrich said. “However, there is no doubt that a child’s chronic exposure to lead that results in sustained blood concentrations in the range of 10 ug/DL and above can have lifelong consequences, including but not limited to reduced IQ, academic underachievement, and even delinquent and criminal behavior.”

With little hard data to support the stories of parents, experts advise that early intervention to treat kids must start now.

“We know that this lead in our system, the amount of effects it’s going to have, is generational,” said Della Becker-Cornell, director of the University of Flint Michigan’s early childhood development center.

The Michigan state legislature has appropriated nearly $70m in aid for Flint, and Snyder has proposed spending tens of millions of dollars more on education initiatives in the city.

“It’s possible that every child in Flint could be affected by high lead levels and so our action plans and resources are providing intervention and treatment,” the governor said in a statement. “We will continue plans to address the long-term needs of Flint’s families just as we have addressed their immediate needs through bottled waters and filters.”

Pat McLaine, assistant professor at the University of Maryland school of nursing and co-author of the CDC report, said Flint’s children need to be entered into early education programs and need to be provided with high-quality nutrition.

“The sooner, the better,” she said. “We do know that children in a resource-intensive environment … do better in school.

“We have to have teachers who are really in tune to the needs of the children,” she said. “If you miss the boat on educating the teachers they’re going to miss these interventions with these kids.”

For now, Becker-Cornell is focused on immersing herself in ongoing discussions about financial aid to address Flint’s crisis. Though the center is renowned among parents, Becker-Cornell’s current focus is raising funds so that her center can help more kids.

Starletta Rett-Henry, another teacher at the center, said she hasn’t noticed any drastic changes in children’s behavior, but that doesn’t mean they aren’t reeling from the aftershocks of the two-year crisis, particularly those from high-risk, low-income families.

“If they’re not getting [their basic needs] at home, how am I supposed to teach you your colors, your alphabet, how to even socially interact with others?,” said Rett-Henry, 33, a Flint resident herself.

“When they go home, there may not be that basic necessity they need to survive. Children are not equipped to handle that.”

Becker said the water crisis constitutes 80% of her daily work while the other 20% is spent “trying to hold my job together because I’m so invested in all these things”. In her office, dozens of cases of water line the walls, a daily reminder of the new reality in Flint and the city’s 100,000 residents.

“We’re going to be living this for a very, very long time,” she said. “It’s going to become our way of life.”