Home Entertainment VH1 goes ‘Behind the Movie’ with ‘Barbershop’ cast 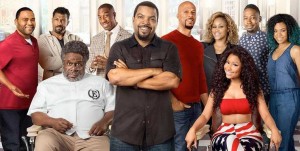 Partnering with hip-hop legend and producer Ice Cube and Chicago native and Academy Award-winning artist Common, VH1 will present “Exploring Chicago with the Cast of ‘Barbershop: The Next Cut,” premiering at 10 p.m. Monday.

According to the network, the Chicago Town Hall special, set at a local college, spotlights a variety of topics that young people are facing across the country, ranging from relationships and artistic expression to gun violence, and the importance of barbershops to community activism. Common and Ice Cube, along with VH1’s Sway Calloway, lead a dialogue with local college students and grass-roots organizers, most of whom have been impacted personally by gun violence.

The program will also include segments where the superstars visit a local barbershop and other Chicago South Side locations to discuss the challenges of living in the city. Also appearing in the special are:

Ryan Henry from VH1’s “Black Ink Crew: Chicago,” whose tattoo shop is a legacy to his late sister and niece

Vic Mensa, Chicago hip-hop performer who “keeps his hometown’s challenges in his art”

“It is important to me that ‘Barbershop’ does more than entertain,” said the film’s producer, Ice Cube, who also reprises the role of shop owner Calvin in this third installment. “Along with comedy, the story touches on relationships and gang violence. This partnership with VH1 is the perfect way to expand this conversation.”

The special is the inaugural episode of VH1’s “Behind The …” series, which will explore all facets of pop culture and its intersection with current cultural and political issues. The series is hosted by Calloway.

“Pop culture has the power to broaden conversations that are central to our audience,” said Amy Doyle, executive vice-President/deputy general manager, VH1 & Logo. “With Ice Cube and Common, two of the most important voices in hip-hop and entertainment, this town hall will bring national attention to issues that affect communities across the country.”