Empress of the Blues by Romare Bearden 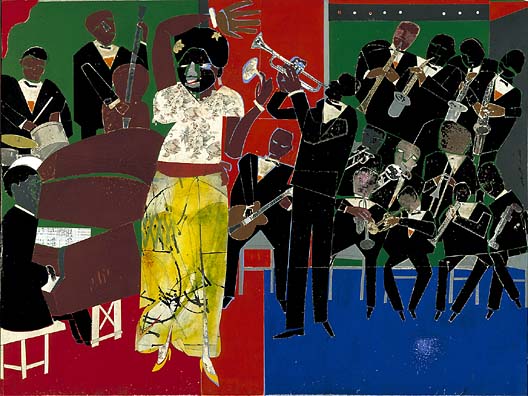 Romare Bearden was born in 1911 in Charlotte, N.C. Romare Bearden lived at various times in Saskatchewan and Pittsburgh. Bearden attended Boston University and New York University. Later, he studied with the German expatriate George Grosz at the Art Students’ League. His first job, in 1938, was as a caseworker with the New York City department of social services.

Following a wartime stint with the U.S. Army, one of his works was accepted into the biennial exhibit at the Whitney Museum. Thus encouraged, he sailed for France, where he studied philosophy at the Sorbonne. Still, Bearden did not ignore his origins.

Romare Bearden emerged as a major artist in the 1960s, at the height of the civil rights struggle. His “photomontage projections” — made up of images snipped from newspapers and magazines, then enlarged photographically — perfectly captured the tension, alienation and dislocation of contemporary black life. In this he was distinctly a man of his era, and of his people. Bearden passed away in 1988 at the age of 76.