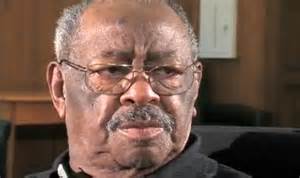 Turner was raised in Oakland, California, the youngest child of a Pullman porter father and a homemaker and nurse mother.[1][2]

Turner got his first training in cartooning via the Art Instruction, Inc. home study correspondence course.[citation needed] During World War II, where he served as a mechanic with Tuskegee Airmen,[1] his illustrations appeared in the newspaper Stars and Stripes. After the war, while working for the Oakland Police Department, he created the comic strip Baker’s Helper.[3]

When Turner began questioning why there were no minorities in cartoons, his mentor, Charles M. Schulz of Peanuts fame, suggested he create one.[4] Morris’ first attempt, Dinky Fellas, featured an all-black cast, but found publication in only one newspaper, the Chicago Defender.[5] Turner integrated the strip, renaming it Wee Pals, and in 1965 it became the first American syndicated comic strip to have a cast of diverse ethnicity.[1] Although the strip was only originally carried by five newspapers, after Martin Luther King‘s assassination in 1968, it was picked up by more than 100 papers.[6]

In 1970 Turner became a co-chairman of the White House Conference on Children and Youth.[2]

Turner appeared as a guest on the May 14, 1973, episode of Mister Rogers’ Neighborhood, where he showed the host pictures he had drawn of several of his neighbors. Turner also presented a clip from his Kid Power animated series, which was airing Saturday mornings on ABC at the time.[citation needed] As well, during the 1972-73, Wee Pals on the Go was aired by ABC’s owned-and-operated station in San Francisco, KGO-TV. This Sunday morning show featured child actors who portrayed the main characters of Turner’s comic strip: Nipper, Randy, Sybil, Connie and Oliver. With and through the kids, Turner explored venues, activities and objects such as a candy factory and a train locomotive.

As the comic strip continued, Turner added characters of more and more ethnicities, as well as a child with a physical disability.

During the Vietnam War, Turner and five other members of the National Cartoonist Society traveled to Vietnam, where they spent a month drawing more than 3,000 caricatures of service people.[6]

Turner contributed his talents to concerts by the Bay Area Little Symphony of Oakland, California. He drew pictures to the music and of children in the audience.[citation needed] On May 25, 2009, Turner visited Westlake Middle School in Oakland to give a lesson to the OASES Comic Book Preachers Class of drawing. Turner collaborated with the class’s students to create the book Wee the Kids from Oakland.[citation needed] 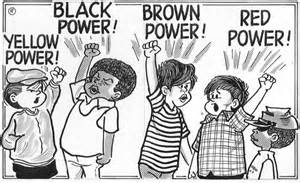 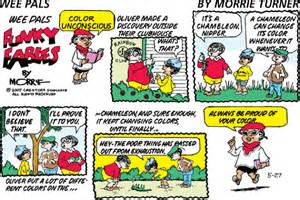 Turner married Letha Mae Harvey on April 6, 1946; they collaborated on “Soul Corner,”[3] the weekly supplement to Wee Pals. Morrie and Letha had one son, Morrie Jr;[8] Letha died in 1994. Late in life, Turner’s companion was Karol Trachtenburg of Sacramento.[6]

Turner was an active member of the Center for Spiritual Awareness, a Science of Mind church in West Sacramento, California.

In 2003, the National Cartoonists Society recognized Turner for his work on Wee Pals and others with the Milton Caniff Lifetime Achievement Award.[10]

Throughout his career, Turner was showered with awards and community distinctions. For example, he received the Brotherhood Award from the National Conference of Christians and Jews and the Inter-Group Relations Award from the Anti-Defamation League of Bnai Brith. In 1971, he received the Alameda County (California) Education Association Layman’s Annual Award.[11]

In 2000, the Cartoon Art Museum presented Turner with the Sparky Award, named in honor of Charles Schulz.[6]

Turner was honored a number of times at the San Diego Comic-Con: in 1981, he was given an Inkpot Award; and in 2012 he was given the Bob Clampett Humanitarian Award.