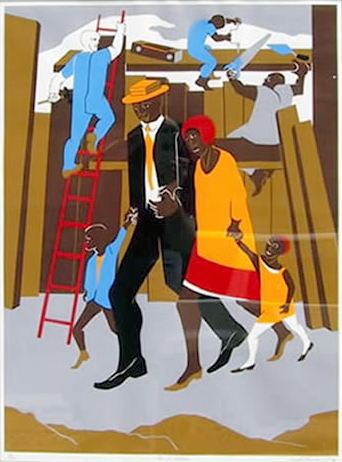 Jacob Lawrence was born in 1917 in Atlantic City, New Jersey. He was thirteen when his family, including his sister and brother, moved to New York City. Lawrence was introduced to art shortly after that, when their mother enrolled him in classes at an arts and crafts settlement house in Harlem, in an effort to keep him busy. The young Lawrence often drew patterns with crayons. In the beginning, he copied patterns of his mother’s carpets; one of his art teachers noted great potential in Lawrence.

After dropping out of school at sixteen, Lawrence worked in a laundry and a printing plant. He continued with art, attending classes at the Harlem Art Workshop, taught by the noted African-American artist Charles Alston. Alston urged him to attend the Harlem Community Art Center, led by the sculptor Augusta Savage. Savage secured Lawrence a scholarship to the American Artists School and a paid position with the Works Progress Administration, established during the Great Depression by the administration of President Franklin D. Roosevelt. Lawrence continued his studies as well, working with Alston and Henry Bannarn, anotherHarlem Renaissance artist, in the Alston-Bannarn workshop.

On July 24, 1941, Lawrence married the painter Gwendolyn Knight, also a student of Savage. They were married until his death in 2000.

In October 1943 (during the Second World War), Lawrence enlisted in the United States Coast Guard and served with the first racially integrated crew on the USCGC Sea Cloud, under Carlton Skinner.[3] He continued to paint and sketch while in the Coast Guard.

After years in New York, in 1970 Lawrence and Knight moved to the Pacific Northwest, where he had been invited to be an art professor at the University of Washington. They settled in Seattle. Some of his works are displayed in the university’s Meany Hall for the Performing Arts and in the Paul G. Allen Center for Computer Science & Engineering. Lawrence’s painting, Theatre, installed in the main lobby of Meany Hall, was commissioned by the University in 1985 for that space.

Offered at $Price On Request