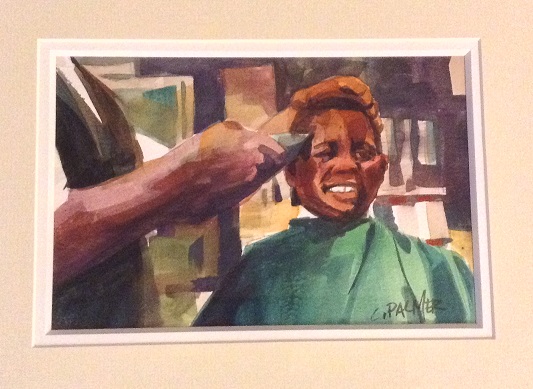 Charly Palmer was born in 1960 in Fayette, Alabama and raised in Milwaukee, Wisconsin. A successful graphic designer and illustrator with his own design studio and Fortune 500 clientele, Palmer devotes much of his life to pursuing his fine art dreams and is well on his way to establishing himself as a fine artist of note. He remembers being fascinated by illustrations in Ezra Jack Keats’ “The Snowy Day” around the age of five. “I could never get enough of the imagery in the book”, he says, “This planted a seed in my young heart. Keats’ works were magical to me”. He would later realize that what appealed to him most were the random geometric shapes, the simplicity of the layered textures and patterns, along with the mix of bold colors.

Palmer has brought to his complex pictorial compositions a technique and style that is unique and readily identifiable. He has in the recent past created work under the assumed name “Carlos”, his alter ego. This allowed him, he says, the freedom to experiment, be spontaneous, and have fun with his art. The result is a body of work that is less controlled and more abstract and primal. Constantly evolving and growing as an artist, Palmer has over time fused the two artistic styles to the degree that he found the perfect stylistic voice with which to express himself in the powerful “Civil Rights” series.
Charly Palmer studied art and design at the American Academy of Art and the School of the Art Institute, both in Chicago, and has taught design and illustration at the college level. His work is in private and public collections that include Atlanta Life Insurance, McDonald’s Corporation, Miller Brewing Company, the Coca Cola Company and Vanderbilt University. He has had a number of one man shows in galleries in the United States. The artist has been the recipient of significant commissions including an official poster for the 1996 Olympics and the Atlanta Convention and Visitors Bureau. He currently lives and works in Atlanta.