I See the Rhythm of a New World by Michele Wood 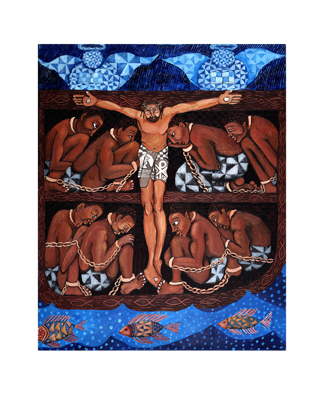 Artist, Educator, Illustrator, Speaker, Designer, Writer and Mentor, Michele Wood (b.1964) is best known for depicting moments in African American history as well as changing consciousness of the African American experience. With a career spanning over 30 years, this prolific artist continues to document the human experience with an unusually poetic introspection on African American history.Michele Wood is the recipient of over 30 awards and honors. Michele was awarded the Ashley Bryan Illustrator Children Book Award in 2012. Her Art quilt was chosen for Glory Kilanko’s Video at the National Center for Civil and Human Rights in 2012. The release of I Lay My Stitches Down, text by Cynthia Grady, won the 2013 Gold Nautilus award, 2012 recipient of the NYPL Children’s Book List and more.Michele’s art has been exhibited in museums and galleries in the USA. Her art is included in private art collections the Indiana State Museum, Tubman Museum and more. A native of Indianapolis, Indiana, the amazing story of Michele’s rise as an artist began with her graduation in 1991 from the American College for Applied Arts- last named American Intercontinental University in Atlanta, Georgia under Steve Steinman. In 1994, the Apex Museum awarded the artist with a grant that allowed her to embark upon a pilgrimage to Yoruba Land in Africa. She was mentored by the international acclaimed sculpture Lamidi Olande Fakaye. It gave Michele an appreciation for aesthetics and led to her first publication Going Back Home: An Artist Return to the South (1996), a book thatexplores her family’s rural Southern heritage. Wood drew inspiration from her African heritage, Southern African-American roots, American quilts, African textiles and everyday experiences.