He Aint’t Heavy by Gilbert Young 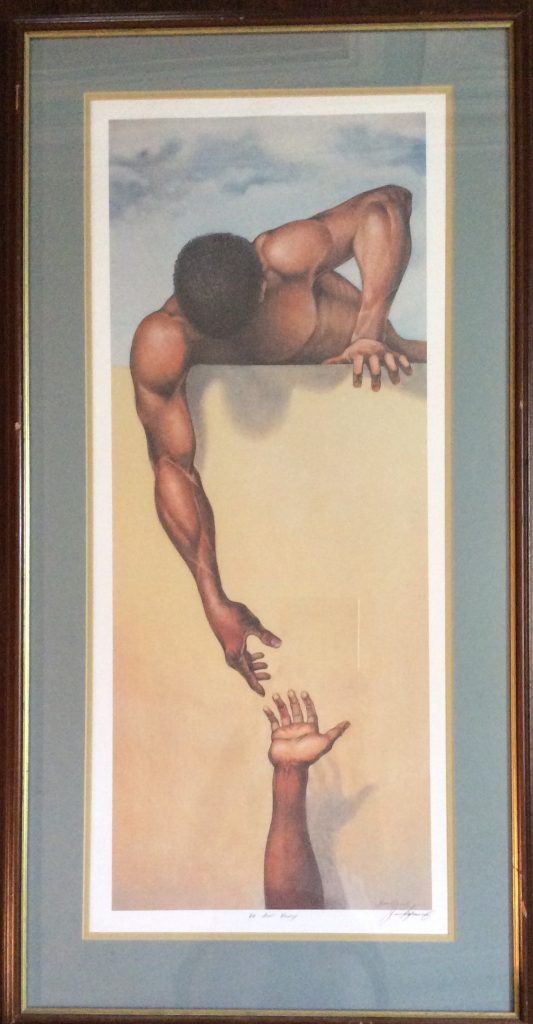 Gilbert Young is a nationally renowned artist, muralist, and art conservator. Born and raised in Cincinnati, Ohio, he served 27 years as director and conservator of the multi-million dollar University of Cincinnati Fine Art Collection. A few of his monumental mural projects can still be viewed in the greater Cincinnati area.

In 1994 Young was named Artist-in-Residence to the University of Cincinnati. He relocated to Atlanta, Georgia in 1995 and became Artistic Director for the International Paint Pals Art Competition in conjunction with the 1996 Olympics. He was commissioned by Procter & Gamble to design the Salute to Greatness Award presented by the Martin Luther King Center for Non-Violent Social Change, and was featured in Ebony Man magazine as a “Talented & Impressive Black Artist.” Young is the first artist to perform live on stage accompanied by an entire symphony orchestra while creating a commemorative work. The painting of Maestro Erich Kunzel and the Cincinnati POPS orchestra was recently installed in the new School for the Creative and Performing Arts in Cincinnati. Gilbert was recognized in “Who’s Who in Black Atlanta,” the 2010 and 2012 editions, and in July, 2011 he was honored by recording artist Big Boi and the Big Kidz Foundation as one of five “Champions of the Arts” along with Academy Award winner Mo’Nique, and actress/director Jasmine Guy. In 2012, Gilbert was inducted into the 66th edition of “Who’s Who in America.”