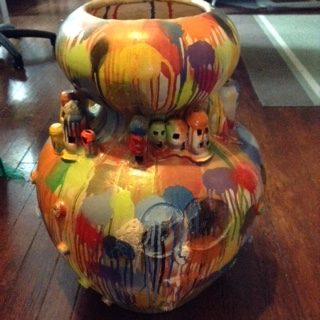 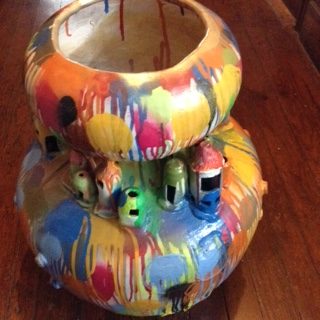 A life in clay began nearly 30 years ago for Mr. Kennard Copeland, when he started producing art in Guyana, South America. Guyana’s terrain consists of sand and clay, so he began dipping his fingers in clay as a child. Although, his love affair with art really began after he was introduced to a local ceramic artist. He had asked her multiple times to teach him how to work with clay, but she was reluctant for fear that he would waste his new skill. After several attempts, she finally agreed to teach him and this was the beginning of his lifelong journey in ceramics. Soon afterwards, Kennard started a clay studio in Guyana in 1989, specializing in products for the Caribbean tourist market and the hospitality industry.

Since then, Kennard has worked as a consultant and a teacher in the Caribbean, South America and in North America, and he has facilitated workshops in Mexico and in France. Some noteworthy achievements include being commissioned by the staff of the former President of Guyana, Dr. Cheddi Jagan, to build his presidential office out of clay, as a birthday gift; being hired as a ceramic consultant by the government of Montserrat right after the volcano eruption in Montserrat, which helped residents deal with the traumatizing effects of the natural disaster; and being commissioned by The Marian Anderson Historical Society in Philadelphia, in the creation of a replica of the Marian Anderson residence.

Due to his impressive craftsmanship, Kennard was eventually sponsored by the Cordell Hull Foundation to enter the United States on an art cultural exchange program. In the United States, Kennard has taught at charter schools, for organizations, and for Prince George’s County, Parks and Recreation division; his focus has included clay preparation, hand building including coiling and pinching, throwing, mold making, large-scale pots, slip decoration, and glazing. Now, Kennard is the co-owner and full-time artist at Tiffanys Art Studio, which specializes in African art.

Thus far, Kennard’s work has been featured in the Caribbean, the hospitality industry, and in private collections worldwide, and Kennard has also been recognized as Prince George’s County as the “Artist of the Month.”  Creating art is a spiritual process for Kennard, as he says the clay tells him what he wants it to become. It has been this kind of inspiration that has lead him to produce truly magnificent, one-of-a-kind African pieces, all of which give a physical representation to traditional African culture, myths, and folklore.