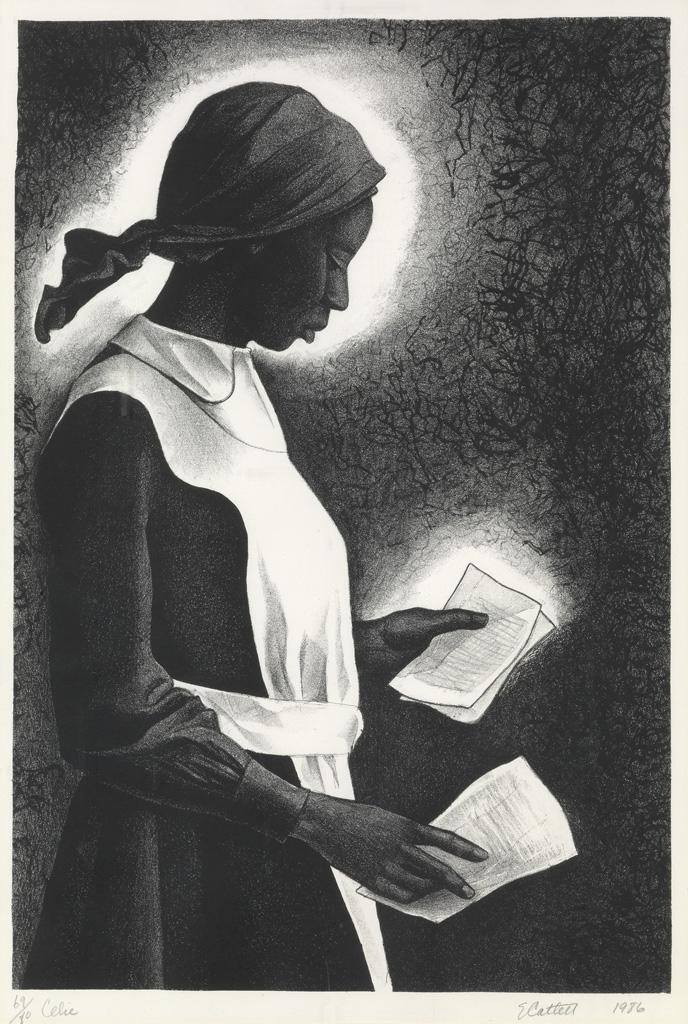 SOLD
Celie
by Elizabeth Catlett
Lithograph on Arches wove paper, 1986
Signed and Numbered by the Artist
Edition size 80
Size 16″ x  23 1/2″
Catlett was commissioned to make Celie, Virginia and Cartas for the opening of the film The Color Purple.

Elizabeth Catlett  was an African-American graphic artist and sculptor best known for her depictions of the African-American experience in the 20th century, which often had the female experience as their focus. She was born and raised in Washington, D.C. to parents working in education, and was the grandchild of freed slaves. It was difficult for a black woman in this time to pursue a career as a working artist, and Catlett devoted much of her career to teaching. However, a fellowship awarded to her in 1946 allowed her to travel to Mexico City, where she would work with the Taller de Gráfica Popular for twenty years and head the sculpture department of the Escuela Nacional de Artes Plásticas. In the 1950s, her main means of artistic expression shifted from print to sculpture, though she would never give up the former.

Her work is a mixture of abstract and figurative in the Modernist tradition, with influence from African and Mexican art traditions. According to the artist, the main purpose of her work is to convey social messages rather than pure aesthetics. While not very well known to the general public, her work is heavily studied by art  students looking to depict race, gender and class issues. During her lifetime, Catlett received many awards and recognitions including membership in the Salón de la Plástica Mexicana, the Art Institute of Chicago Legends and Legacy Award, honorary doctorates from Pace University and Carnegie Mellon and the International Sculpture Center’s Lifetime Achievement Award in contemporary sculpture.
Back to Art for Sale