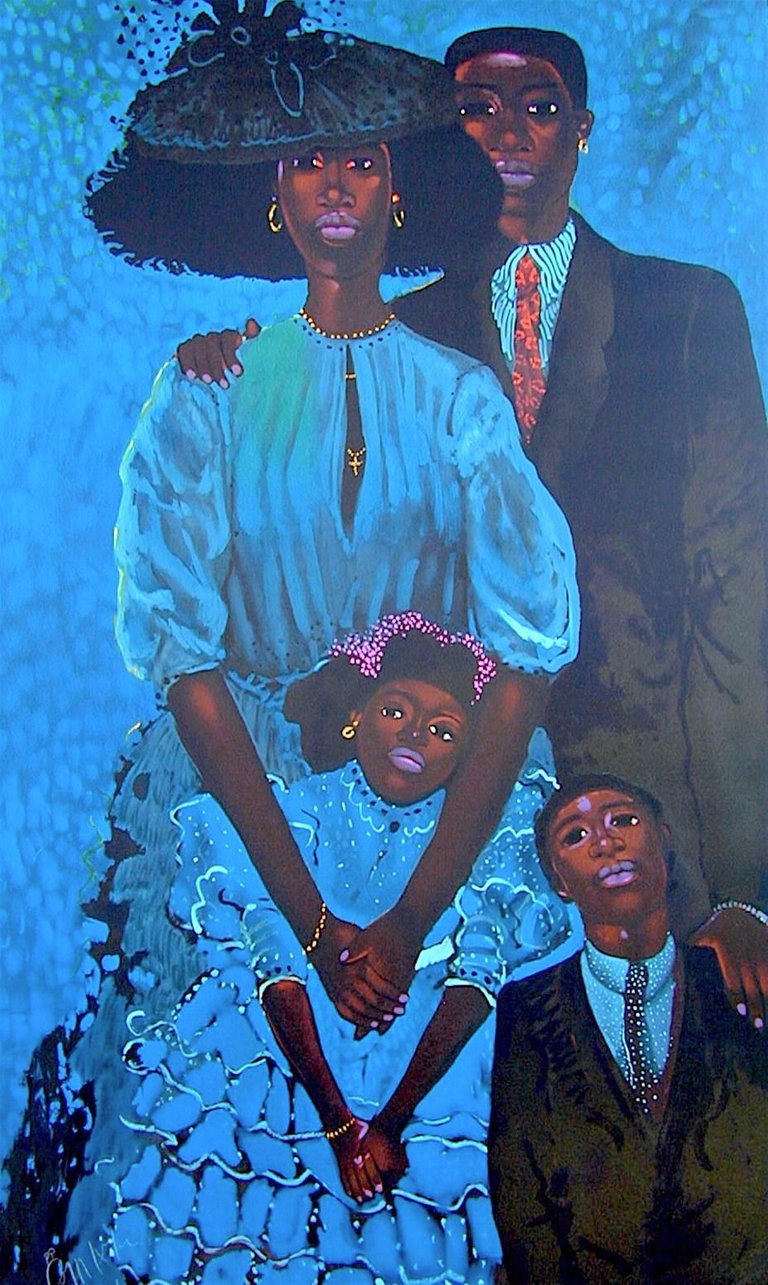 Although Geoffrey Holder was best known as a performing artist, he was also a visual artist. He first came to wide public notice as the dry-witted “Un-Cola Man” in Seven-Up commercials, and because of this he had a signature voice. While Holder shied away from being called a Renaissance man, his kaleidoscope of talents has allowed him artistic expression in dance, acting, writing, directing, photography, set design, sketching, and painting, he even published a Caribbean Cookbook. He first found encouragement to pursue painting in imitating his older brother, Boscoe, and the general theme of his drawings and paintings is the Caribbean. His choices of subjects, scale, and colours all reflect his native Trinidad.

Everything about Holder’s work suggests his native land. His subjects are blacks, portrayed with enough fluidity to suggest the Caribbean attitude of “no problem, mon.” In his coloured pencil work Man in Water (1985), for example, a man’s head rises out of rippling water. The man’s head is like an island, as is Trinidad. The piece offers a worrisome yet serene appearance. Holder’s still lifes are exotic, featuring plants with large flowers and unusual leaves.

As in the tropics, where the hot weather allows plants to grow far into maturity, Holder’s subjects take nearly all the space available. For the Broadway show The Wiz (1975), a black adaptation of the classic film The Wizard of Oz, Holder dressed most of the female cast members in large hoopskirts. His work netted Holder a 1975 Tony award for costume design. Later, after the award of a Guggenheim Foundation fellowship, he painted a thirty-foot mural on the Trinidad Hilton Hotel.

The tropical influence is also apparent in the vibrant colors of Holder’s works. The sun-drenched simplicity of his paintings offers an array of color harmonies common to his native land. Holder has achieved his lustrous palette by working through mediums to find those that allow him to control intensity. He has progressed from oil to using a combination of oil, wax, and grease-based coloured pencils and sticks.

Simple, yet full of personality, Holder invests a focused isolation in his art. As he does personally, his artistic forms need their own space. This is the feeling that underlies Holder’s art.
Back to Art for Sale