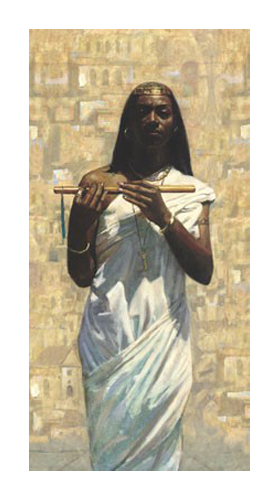 Andrea Rushing was born in Virginia in 1960. At an early age his drawing showed promise, catching the praise and encouragement of his parents and of a family friend who gifted him with materials and advice. By fourteen he was painting in acrylics, and in both execution and subject matter his work was considerably more sophisticated than his years. Yet by his own choice Rushing left college, and painting, for a stint in the Navy and after that for a short stay in the defense industry. It was this detour that broadened Rushing’s perspective and provided a great catalyst for change: he learned, traveled, let the world educate him, and then finally came to understand that painting was his future.

Rushing returned to creative work, studied at the Academy of Art in San Francisco and for the first time found himself around other artists, and other people, who thought and felt as he did. From there the artist began to paint and recognition followed: he has had one man shows at San Diego State University, San Marcos State University, and at the San Diego Museum of Art. Currently his work hangs in the Michael J. Wolf Gallery in San Diego, and in the Heritage Art Gallery and the Reginald Ingraham Gallery in Los Angeles.

His is a distinctly European sensibility, driven by a profound interest in the human condition and by the insights humanity displays in response to that condition. At its lightest Rushing’s work suggests Magritte, showing life in an amused juxtaposition; at its most intense, Dali or Rousseau, where man and image confront each other in unnerving contrast. Rushing’s great power as a painter lies in his insights into human nature — sometimes as in studies of rich symbolism; other times in straightforward portraiture, where his brushwork reveals the sitter’s truth and destiny. And always things are rendered with compassion and elegance.

“I never call myself an artist,” says Rushing. “I am a painter. I don’t wait for inspiration; I just do the work. There are so many things that can derail creativity. That’s why criticism or praise are equally dangerous, and why ultimately it’s useless. My only job is to continue to mature as an artist, learning how to paint freely and paint comfortably. But it will always be just one step at a time, a painting, like a construction. A chair for example. It needs to be comfortable, it needs to be functional and beautiful. But it’s a built thing and if it’s done well it will stand up. Paintings I think are the same, they have to build one step at a time and they have to be true in order to last.”