Noah’s Ark: After the Flood by Jimi Claybrooks 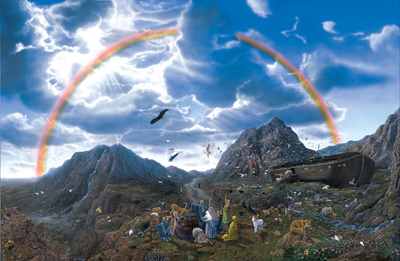 OUT STOCKNoah’s ArkJimi ClatbrooksSigned serigraph ed. 2003
Size Paper: 28 x 38 3/4Image: 24 x 36
Jimi Claybrooks is an award-winning artist of significant critical acclaim. He has become known in artistic circles as “The Master of Detail”. With over 25 years of experience as an illustrator, graphic arts designer, fine arts painter and sculptor, his attention to detail is what has made him stand out from all the rest. His images have been sold around the world, and his works have appeared in the top Black Art Shows nationwide, as well as on numerous TV and Feature Length Films such as “Courage Under Fire”, “Jackie Brown”, and the popular TV series, “E.R.”, to name a few.”
Back to Art for Sale