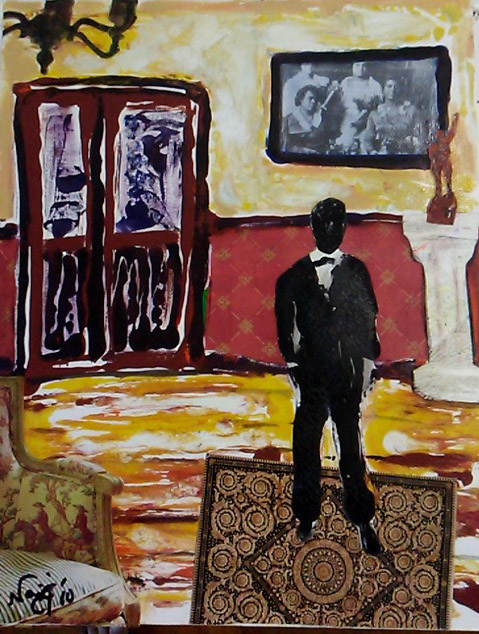 Visual artist and entrepreneur Najee Dorsey is known for embracing southern roots in his work by relaying scenes of African American life in the south on canvas. He began his journey as an artist at the age of five. From that point on, Dorsey continued making art as a favorite pastime to a professional career.
In 2005, the Dorseys moved to Atlanta, GA, where Najee became a full-time artist. Focusing solely on his art resulted artist. Now, more than fourteen years later, his work has been featured in nine museum shows including, Visions of our 44th Collection at the Charles H. Wright Museum in Detroit, MI and Leaving Mississippi: Reflections on Heroes and Folklore at the Columbus Museum, Columbus, GA, Houston Museum of African American Culture (HMAAC) Houston, TX and the African American Museum in Dallas, TX. Over the years, Dorsey’s changing mediums have resonated with many people, but his consistency in exhibiting imagery rooted in his southern heritage is what Najee Dorsey is known for. Over the past twenty-five years, Dorsey’s work has been consistently featured and acquired by a number of institutions, and private collections across the United States.

Najee Dorsey founded Black Art In America™ (BAIA) in 2010 as a free online media platform for African American artists, collectors, art enthusiasts, and arts professionals. In the company’s conceptual stages, influencers from BAIA’s audience were surveyed and it became clear that their issues were centered on exposure, appreciation, and access to each other. BAIA™ was founded as a centralized location for profiling the African American artist — giving members of the network access to the work of African American artists (past and contemporary), and most importantly, opportunities for interchange. Since 2010, the network has become the leading online portal and resource focused on African American art, artists, collectors, industry leaders, and arts enthusiasts. The BAIA™ online network currently has a monthly virtual reach of half a million people and growing.

As an artist, Najee Dorsey has developed much in his craft over the years, and has become known for his mixed media collage, digital media collage images of little known and unsung historical figures, as well as nostalgic scenes from African American life in the southern United States. In his work, as Najee chronicles moments in Black life throughout history, he maintains that, “stories untold are stories forgotten”. Far from the days after dropping out of arts college, and becoming uncertain about his future in the arts, Dorsey has forged a successful career as an artist, being featured in numerous solo and group museum shows, television broadcasts and print publications — a major feat for any artist. As well as these accomplishments, he has skillfully combined his creative edge, and business acumen to develop a steadily growing online community that documents, preserves and promotes the contributions of the African American arts community. Najee currently lives in Columbus, GA with his wife, Seteria.